Bhadrak: In one more heinous incident of rape coming to the fore in Odisha, a 15-year-old Dalit girl was allegedly gang raped by miscreants near Gopalpur in Chandbali area of Bhadrak district in wee hours today.

However, police have detained one of the accused while three others managed to escape.

As per a complaint lodged by the girl’s family, after watching Jatra near Kalipadia, the girl was going to her maternal uncle’s house with her brother (cousin) at around 4,30 AM today. Both were riding separate bicycles. Midway, four youth came on a bike and waylaid them in front of fire station near Chanbali College Square. They first snatched two smartphones from them and thrashed her cousin and gagged him. Later, three of them gagged the girl and took her inside a bush before taking turns to rape her. Another accused was waiting outside the bush to keep an eye on passerby. 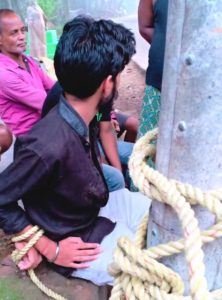 Moreover, it is also alleged that the accused assaulted the girl and threatened her that they have captured a video of the rape and will make it viral if she discloses it to anyone. When the accused were trying to flee, her brother managed to nab one of them identified as Biswajit. Later, the locals tied him up and thrashed him before handing him over to police.

The victim’s family members appealed the police to investigate the incident and help them get justice.

IndiGo flights from Odisha capital delayed due to system outage