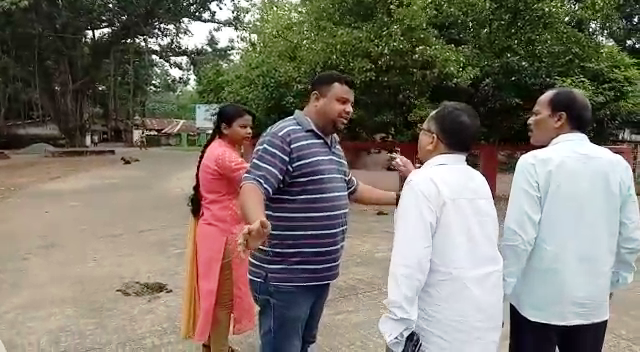 Balasore: A high-pitched drama prevailed in front of Nilagiri court of Balasore district after MLA Sukant Kumar Nayak had a face-off with the local woman Tehsildar over an eviction drive this morning.

Following the incident, the BJP MLA sat on a dharna in front of Nilagiri sub-collector’s office alleging that he was misbehaved by Tehsildar Sushrita Tudu as he opposed the eviction.

Sources said an eviction drive was carried out to remove constructions of clerks on court premises in presence of Tehsildar Tudu and Additional Tehsildar Rakesh Panda at around 8 AM today. In the meantime, the MLA reached the spot and opposed the eviction alleging that the constructions were being razed without prior rehabilitation.

Later, an altercation ensued among the MLA and Tehsildar  and Additional Tehsildar. The MLA said he had a discussion with the Collector and it was decided that the constructions will be demolished after rehabilitation of the clerks. He further questioned as to why the eviction was carried out all of a sudden without any prior notice.

It is alleged that after Nayak opposed the demolition, the Tehsildar and Additional Tehsildar reprimanded him in filthy language. Protesting this, the MLA sat on a dharna in front of the Sub-Collector office. Later, police personnel were deployed in the are to avoid any unpleasant situation.  On the other hand, lawyers and clerks locked the Tehsil office and staged a dharna protesting the eviction.