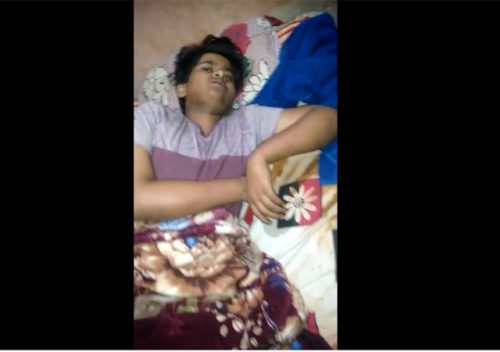 Sambalpur:  Tension ran high at Garposh village in Odisha’s Sambalpur district after a mobile phone recorded video revealed the shocking details behind the death of a 16-year-old boy after being allegedly ragged in a Vishakhapatnam-based college hostel.

The deceased student, Shreyas Kesharwani, was tortured and severely beaten up by three to four students of Sri Chaitanya College, the family members alleged.

The incident took place on December 26 last year and the hapless boy had recorded the ordeal he was meted out by his seniors on that fateful day in his mobile phone.

According to the video where Shreyas was seen speaking about the torture in a choked voice that his seniors thrashed him black and blue in the bathroom after he fell on the floor.

He was threatened not to reveal about the incident to anyone.

Though he brought the ragging incident to the notice of the college authorities, they reportedly did not take any steps in this regard, family members alleged.

They claimed that Shreyas has named three to four students who had physically tortured him.

Protesting the incident in the college, Garposh villagers staged a demonstration and demanded stern action against the accused. The irate locals demanded action against the concerned authorities of the college and a compensation of Rs 1 crore to family of the student. The agitators had also staged a rail roko in the region which was later pacified by the police.

Meanwhile, a complaint has been registered at Garposh police outpost based on the allegations of Shreyas’ father.

Speaking to reporters, Sambalpur Superintendent of Police (SP) Sandip Arora said a police team has been formed and leave for Vishakhapatnam on Thursday to probe the matter.

He also informed that the case will be transferred to the concerned police station in Visakhapatnam, under whose jurisdiction the incident occurred.

Life and times of Kelucharan Mohapatra through students’ eyes