As per reports, the teachers are agitating against the Odisha government's decisions on contractual recruitment, which they feel is unfair and discriminatory. 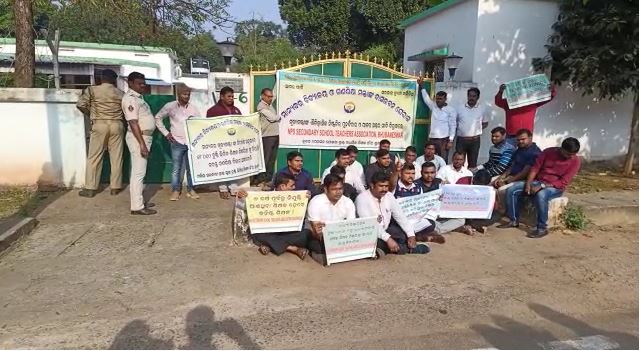 Bhubaneswar: Teachers of government high schools in Odisha staged a protest outside the residence of School and Mass Education Minister Samir Ranjan Das here today, questioning the contractual policies of recruitment by the State government. Members of high school and middle school teachers’ associations were seen holding banners and staging a sit-in protest outside the Minister’s house. As per reports, the teachers are agitating against the Odisha government’s decisions on contractual recruitment, which they feel is unfair and discriminatory.

“The government has abolished the contractual agreement of teachers who have joined since 2016 but has not done son for teachers serving prior to that date. What about teachers who are serving since 2004? Why isn’t the 2022 contractual rule repeal universally applicable to all? This discrimination between seniors and juniors is not acceptable,” the agitators claimed, while demanding  regularisation of jobs for all those who come under the contractual agreement rules of 2013.

“The discrepancy among teachers as regards repeal of contractual recruitment is not expected from the government. We want fair treatment,” said one of the teachers Pradipta Kumar Pradhan.

Another protestor Anant Narayan Jena echoed similar views and demanded that the government conceive same  repeal rules of contractual recruitment for all the teachers, that would hold true for the entire teaching fraternity without any discrimination.

The teachers also warned to stop taking classes and keep the upcoming matric examination on hold if their demands are not addressed with immediate effect.

Mehrauli murder: Aftab would have killed Shraddha ten days before but…