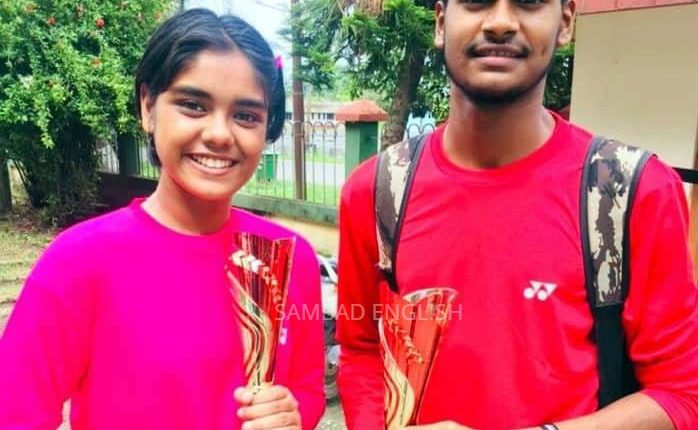 Bhubaneswar: Odisha’s long wait for its first Sub-junior National medal in the badminton is likely to end when the leading sports-promoting state plays hosts to the 33rd edition of the championships for U-15 and U-17 boys and girls in Bhubaneswar from December 17 to 22.

Odisha State Badminton Association (OSBA), which is set to field a 22-member squad in the ensuing championship, pins hopes on its India No 1 shuttlers Ayush Pattnayak and Swetaparna Panda. Both have been given direct entry to the main draw in respective doubles and mixed double events.

Baripada boy Ayush is currently leading the Badminton Association India (BAI) Rankings in U-17 doubles with 542 points. He is also placed at No 6 in singles with 576 points. Earlier this year, Ayush finished U-17 boys doubles runners-up at the All India Sub-junior Ranking Tournament in Imphal with Suhas V as his partner.

Cuttack girl Swetaparna is now heading the BAI Ranking in U-15 mixed doubles with 310 points. She is the younger sister of rising India star Rutuparna Panda and has the reputation of winning the U-15 mixed doubles title at the All India Sub-junior Ranking Tournament in Imphal with Sathwik Reddy of Telangana as her partner.

Apart from Ayush and Swetaparna, Odisha squad has players to upset the applecart of seeded shuttlers and go on to make a podium finish. Prominent among them are: Partha Sarathi Mishra, Ajay Majhi, Siddharth Rajesh Patil and Tahasif Khan in boys’ events and Harshita Rout and Sruti Swain in girls’ categories.

“National championship will be big opportunity for budding talents to showcase their prowess and come to limelight. Playing in front of encouraging crowd and on home courts will be an added advantage for Odisha youngsters to go the much needed medal,” said former state champion Bibhas Parida.

Another advantage for the host state is that most of its players are trainees of Bhubaneswar-based Odisha SAI Regional Badminton Academy and have prepared well under the guidance of SAI coach Tirupati Kiran.

According to OSBA secretary Nileen Kumar, the ensuing Sub-junior National Championship will play a big role for the development and promotion of badminton in Odisha. “We are hopeful of putting up competitive performance and bag our first medal. But more importantly, this National will help our budding shuttlers to gain much needed confidence and improve their rankings,” he observed.