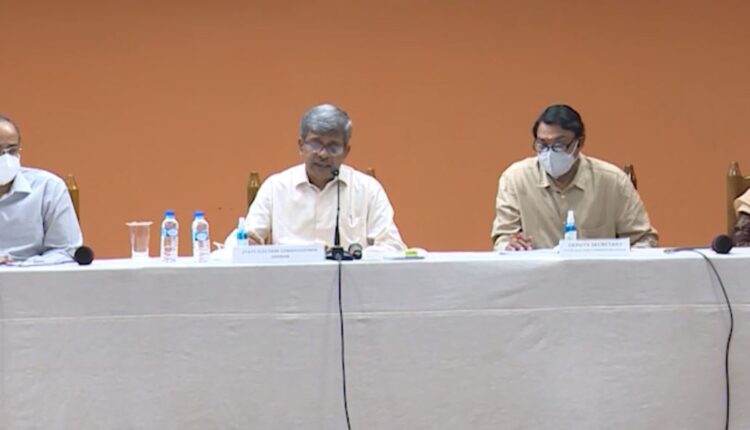 Bhubaneswar: The Odisha State Election Commission (SEC) on Thursday held a meeting with representatives of various political parties for the smooth conduct of the upcoming urban bodies election in the state, officials said.

Representatives from the ruling Biju Janata Dal (BJD), opposition Bharatiya Janata Party (BJP) and the Congress along with leaders from other political parties have attended the meeting.

Speaking to reporters after completion of the meeting, State Election Commissioner A.P. Padhi said the state housing and urban development department has issued notifications on delimitation of wards and reservation seats in 110 urban local bodies (ULBs).

Accordingly, preparations to conduct elections in 107 municipalities/NACs and three corporations (Bhubaneswar, Cuttack and Berhampur) have been started, he said.

The draft electoral roll will be published on Thursday.

The people who are enrolled in the latest (as on January 1, 2022) electoral roll published by Election Commission of India are eligible to vote during the urban election, Padhi said.

“We have informed the political parties about direct election to the post of mayor and chairperson during the upcoming urban election. We also talked about the use of EVMs in the poll and modification made on submission of affidavits by contesting candidates during the meeting,” he said.

The Election Commissioner said the political parties have also given their suggestions and recommendations for the poll.

The Commission is planning to conduct the urban election soon after the Panchayat polls, which is scheduled to end by February 28.

Recently, the Commission has enhanced the spending limit of the candidates contesting for the post of councillors, corporators, chairpersons and mayors.

During the meeting, the BJP has proposed to implement a single-window system for giving all kind permission to the candidates during the election time, said BJP leader Surath Biswal.

However, the Congress has raised an objection for conveying the meeting at this time, when all political parties are busy in the Panchayat election, informed party leader Sibananda Ray.

BJD leader Sulata Deo, who attended the meeting, said the opposition party has protested because they fear defeat in the urban poll.