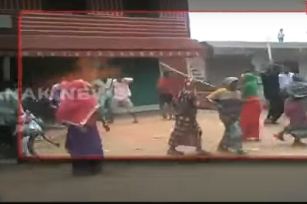 Kendrapara: At least five women were injured in attack by goons for protesting illegal liquor sale in Rajkanika area of Kendrapara district in Odisha today.

The situation turned uglier when irate women vandalised in the area to protest against attack.

According to reports, the goons attacked women protestors, who ransacked a country liquor shop located at Olaver square in Rajkanika at around 1 pm and proceeded to destroy another foreign liquor shop near the market.

The anti-liquor women group had earlier warned the liquor traders to shut illegal sale in the area.