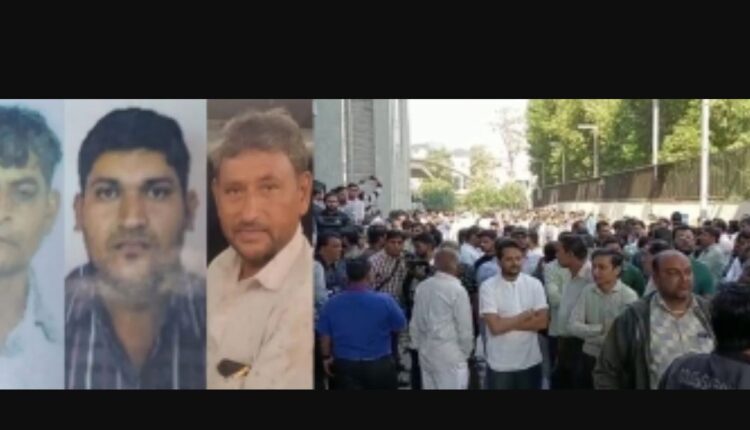 A retrenched worker and his associate murdered a textile factory owner, his father and uncle inside the manufacturing premises in the Anjalir Industries area in Surat, police said on Sunday.

Police have picked up two suspects, one of them is a juvenile.

Surat Deputy Police Commissioner Harsad Mehta told the mediapersons that Kalpesh Dholakia owned an embroidery unit, named Vedanta Texo. On Sunday morning, around 9 a.m., the retrenched worker, whose services were terminated ten days ago, came to the unit along with his associate.

The two had a heated argument with Kalpesh Dholakia, which soon turned into a scuffle. During the fight one of the two accused stabbed Dholakia with a knife.

Kalpesh’s father Dhanjibhai and maternal uncle Ghanshyam Razodia, who too were present at the unit intervened, but they too were stabbed. The two then fled from the unit, said the officer.

All three were rushed to a nearby hospital, where they succumbed to their injuries, said the police officer, and added that two suspects have been detained for questioning, one of them is a juvenile.

Another Officer, Deputy Commissioner of Police Pinakin Parmar told the media that the worker was terminated, because of some mistakes that he had committed during his night duty hours which had damaged the production. Primary information was that before terminating his services, the industrial unit owner had paid all his dues.

Well-wishers and industrialists in large numbers gathered at the private hospital. BJP MLA Kumar Kanani demanded that the police keep check on the history-sheeters entering Surat in search of jobs.

The Southern Gujarat Chambers of Commerce and Industry president Dinesh Navadia sought stern action against the accused, and has promised to take up the issue with authorities for more protection of industrialists.