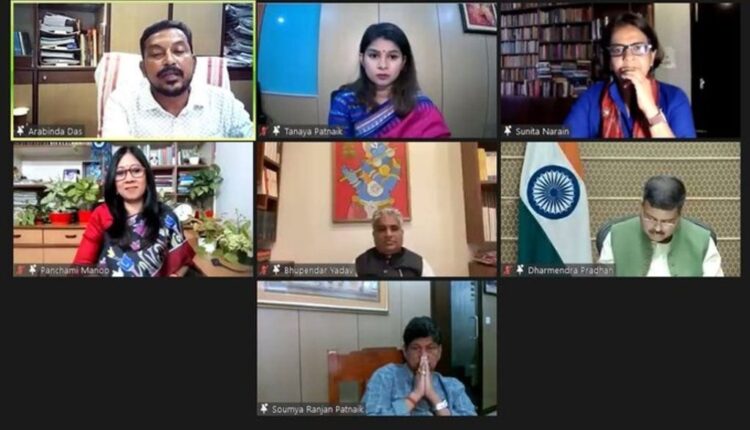 In her welcome address,  Sambad Group Executive Director Tanaya Patnaik said, “Many people ask me about Sambad Digital. Let me clarify that it is an umbrella of digital content of all our verticals. Sambad has many firsts. We were the first to introduce Odia websites—sambad.in and kanaknews.com. Our websites became popular overnight forcing our competitors to launch their websites in Odia”.

She further added that a separate segment has been launched from today to connect with Odia diaspora and an environment initiative ‘Punascha Pruthibi’ has also been launched on this day.

Hon’ble Chief Minister of Odisha Shri Naveen Patnaik expressed his delight over the launching of Sambad Digital and Punascha Pruthibi.

“Over the last decade, digital media has been evolving rapidly and changing the way of dissemination in terms of news is being consumed. Affordability and accessibility of technology in the form of internet and smart phones has changed the face of news industries. Thanks to the digital and social media, the news comes to us almost instantly. Sambad digital is one of the earliest publishers to provide digital content in Odia to its readers,” he said in his video message.

On the environmental initiative the Chief Minister said, “Media can create a positive impact with its wide reach to create awareness. It can mobilize masses as well to take proactive measures to protect our planet. Odisha is no stranger to the vagaries of nature brought by climate change.  From cyclones to flash floods, we have received with natural disasters annually. However we have also paved the way and set an example in front of the world with our extensive and intensive disaster management strategies. With construction of numerous cyclone shelter homes and with use of early weather forecast system, the state has been able to successfully mitigate disasters, thus making us a resilient community. We are taking up projects to build 89 indoor stadiums at the district level that will double up as cyclone shelters and field hospitals during emergencies.”

He further said that news pertaining to Odia diaspora in Sambad e-paper will help them to come closer to Odisha and unite us from across the globe.

“This is not only the inauguration of Sambad Digital and ‘Punascha Pruthibi’, but also an initiative with Sambad being the custodian to unite us all for a noble cause. This is a great move towards sustainability and digitalisation,” said Union Education and Skill Development & Entrepreneurship Minister Dharmendra Pradhan.

Lauding Sambad Group for its pioneership in media, Shri Dharmendra Pradhan, Union Cabinet Minister for Education, Skill Development and Entrepreneurship said it is the first newspaper of the state to use computers for printing purpose.

“In the next 15-25 years, newspaper contents will be accessed by all through smart phones. The Government of India has planned to provide internet connectivity in rural areas. The digitalisation is all set to receive a major boost with the rolling out of 5G network in the near future,” the Union Minister said.

The ‘Punascha Pruthibi’ campaign will benefit the coastal areas of the state in the next 15-20 years, he said, adding that this is a revolutionary step.

“The initiative will be more effective with the participation of students and youths. It is our collective responsibility to make the planet safer and eco-friendly,” he added.

Union Minister for Environment, Forest & Climate Change Bhupender Yadav in his address said: “The Central government is working towards making a better world, where no one is left behind. We have targeted to enhance the country’s production of biofuel and increase tree cover.”

Noted environmentalist and Padma Shri awardee Sunita Narain was welcomed over a conversation with Panchami Manoo. She began by lauding Odisha’s Meteorological department for ensuring minimum damages and casualties during every cyclone and natural disaster it survives. She also emphasized that every time the state faces a cyclone or a natural disaster, the coping ability of its people reduces.

Talking about the deteriorating climate situations, Narain said, “Climate change is not the only reason. Our mismanagement counts too. We are destroying our ponds and natural reservoirs and by that, we are in some ways, destroying out coping abilities.”

Highlighting the alarming carbon emission issue, the Director General, Center for Science and Environment (CSE) said, “Three decades have gone by and we have gone backwards than forward. We are in a catastrophe which is bad both for the rich and the poor. The western world has to move faster and act promptly to address the issue of climate change. We need to do more. We can do and we must.  We owe it to the people of Odisha.”

Narain also talked about the prevailing COVID-19 adversities. She believes people’s dystopian relationship with food and nature have roles to play there.  “If everybody is not vaccinated, no one is safe,” she said.

Later, Narain congratulated Sambad Digital for its latest initiative ‘Punascha Pruthibi’. “The most critical thing is to tell the story as it happens. Environmental issues are about rights of community and voices of the voiceless at large… I am personally, really excited and will be definitely reading it.”

Sambad Group Chairman Shri Soumya Ranjan Patnaik in his address said: “The world should come together to address the social dichotomy at the earliest. Digital media must be encouraged to make the world a better planet to live. We have not yet succeeded in bringing a harmony between technology & environment. Punascha Pruthibi initiative has been launched as an attempt to address the issue:

Vote of thanks was delivered by Shri Arabind Das, CGM News (Sambad).

The event organized on virtual mode, owing to Covid-19 advisory to avoid physical gatherings, witnessed an overwhelming participation of people from various walks of life. The webinar was attended by over 3000 people on the cloud meeting platform Zoom.

Sambad Digital is the undisputed leader in the league as the digital verticals account for a collective engagement of 100 million a month. The logo of Sambad Digital was also unveiled.

On the sidelines of the programme, environment initiative ‘Punascha Pruthibi – One Earth. Unite for It’ was launched. It is a first-of-its-kind long-term multimedia initiative to create awareness on environment, climate change and ecological issues threatening human existence.

With Sambad e-paper amassing highest footfall from readers beyond Odisha, the media behemoth also earmarked a section in the online edition of the newspaper that will feature news pertaining to Prabasi Odias (Non Resident Odias).

The launch event coincides with the Yuva Swabhiman Divas which is celebrated to mark the birthday of Sambad Group Chairman and Editor of the largest circulated daily ‘Sambad’ Shri Soumya Ranjan Patnaik.

Odisha: Shree Lingaraj Temple to reopen for devotees from Sept 1