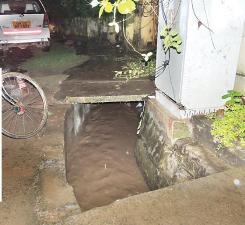 Bhubaneswar: In a heart-wrenching incident, an elderly woman died due to drowning after accidentally falling into an open drain in Odisha capital today. This is the third such incident in the last nine months.

The news came after an hour-long spell of rain inundated several parts of the city causing untold hardships to the citizens and a massive traffic jam on the National Highway.

The deceased has been identified as T. Apalama (60), a resident of Salia Sahi slum here. She fell into the drain while returning home from Indradhanu market in Nayapalli here.

As per the available information, the incident took place on Jaydev Vihar – Ekamra Villa road in the capital city this evening.

After being alerted about the incident, the locals rushed to spot and pulled up the boy from the open drainage. Later her body was sent to Capital Hospital for autopsy.

Following the incident, the angry locals staged a road block demanding adequate compensation to the family of the deceased. The locals also alleged that the Bhubaneswar Municipal Corporation (BMC) has not been repairing the opens drains despite repeated complains.

Urban flooding and water-logging menace has become a yearly event in the city due to downpour in the Smart City posing hazard for denizens.

Earlier, an elderly man and a minor boy were swept away in open drains in Ganganagar and Nayapalli areas  in Bhubaneswar.