ODISHA LATESTTOP
By Sambad English Bureau On May 2, 2020 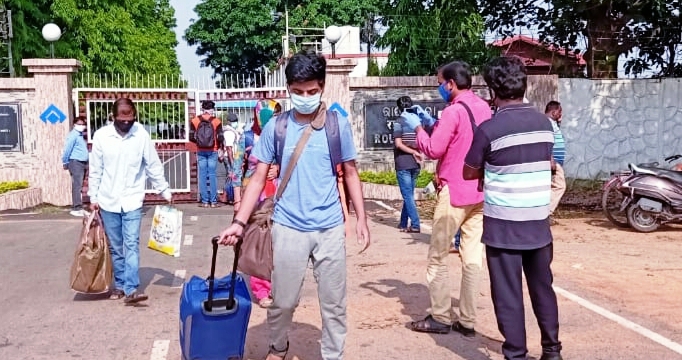 Rourkela: It was a sigh of relief for over a hundred students from Odisha, who were stranded in Kota of Rajasthan, after they arrived in their hometown here this morning.

Reportedly, 114 students who had boarded four buses from Mahavir Nagar  in Kota at 10.40 am on Thursday, reached here around 8 am today. The buses reached here via Madhya Pradesh, Chhattisgarh, Raighar, Sambalpur and Jharsuguda.  The vehicles  were later stationed at airport premises in Sector 13.

Soon after, health screening of all the students were conducted by a medical team. Parents of the students later came to take their children to their houses. However, students who will not show any COVID-19 symptoms during the screening will be allowed to go to their respective houses. And, their family members will be strictly instructed to keep them in isolation for 14 days, sources said.

However, if any of the students will show symptoms, he or she will be sent to Hi-Tech COVID-19 hospital, sources added.

Worth mentioning, on April 18, parents of the students had met Rourkela ADM Aboli Sunil Naravane and requested him to take necessary steps to bring back their wards stranded in Kota. The ADM later had appraised the CM about the matter.