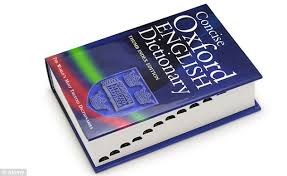 London: The Oxford English Dictionary has added over 600 new words, phrases and senses in its latest quarterly update.

“By the mid-20th century, ‘woke’ had been extended figuratively to refer to being ‘aware’ or ‘well informed’ in a political or cultural sense,” the Oxford English Dictionary (OED) said in a statement.

The use of “woke” by supporters of the Black Lives Matter movement — an international activist movement that campaigns against violence and racism toward black people — and in particular the phrase “stay woke”, are thought to have introduced the word to a broader audience, especially on social media, Xinhua news agency reported on Thursday.

“Post-truth” was the Oxford’s 2016 word of the year. It was defined as “relating to or denoting circumstances in which objective facts are less influential in shaping political debate or public opinion than appeals to emotion and personal belief”.

Besides, over 50 new words and 30 new senses related to tennis were added. “Tennis mom” and “tennis dad”, for example, are now used to describe parents who actively and enthusiastically support their child’s participation in the sport.

The dictionary has also got a new end. “Zyzzyva”, a tropical weevil native to South America, is the new last in place of “zythum”, a kind of malt beer brewed in ancient Egypt, which was the last alphabetic entry for a decade.

Meanwhile, the word “thing” now has a new sense defined as “a genuine or established phenomenon or practice used in questions conveying surprise or incredulity, such as ‘how can that be a thing?’,” said the OED, adding that the usage has been traced back to an early episode of television series “The West Wing”.

In explanation of how a word qualifies for take-in, the OED said it “requires several independent examples of the word being used, and also evidence that the word has been in use for a reasonable amount of time.”

The OED will publish its next update in September.
(IANS)