Overseas Pakistanis to protest outside UNGA during Sushma Swaraj’s speech 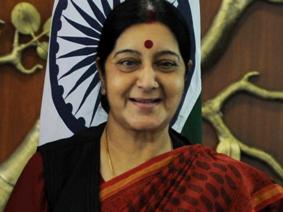 Ahead of External Affairs Minister Sushma Swaraj’s address at the 71st session of the UN General Assembly on September 26, overseas Pakistanis are planning to protest against the alleged “brutalities” by Indian security forces in Kashmir.

As Pakistan lobbies for the support of the international community on the Kashmir issue — the main agenda of Prime Minister Nawaz Sharif’s speech at the UNGA on Wednesday — Kashmiris from across the border will protest to “express their solidarity” with people of the valley, said Sultan Mahmood Chaudhry, former Prime Minister of Pakistan-held Kashmir.

“India has been committing grave human rights violations in Kashmir for 72 days and killing innocent Kashmiri women and children. Kashmiris from all over the world would unmask Indian brutality before the world community,” Dawn online quoted Mahmood as telling the media.

According to him, permission for the protest had already been sought.

“We are also trying to stage a demonstration outside the Indian High Commission in Canada or Canadian parliament in protest against human rights violations in Kashmir,” he said.

According to the Pakistan Tehreek-e-Insaf leader, Sharif’s address at the UNGA would be an exercise in futility. “Kashmiris want him to truly represent sentiments of 200 million Pakistanis and Kashmiris instead of delivering a formal speech.”

Mahmood also criticised Sharif for what he called his decision to send some members of the National Assembly for “joyrides” abroad in the name of projecting the Kashmir cause.

While the premier is set to highlight the Kashmir issue on Wednesday, India is preparing to raise the September 18 attack by four terrorists — suspected to be from the Pakistan-based Jaish-e-Mohammad group — at the Uri Army camp which left 18 soldiers dead and over 30 injured. (IANS)