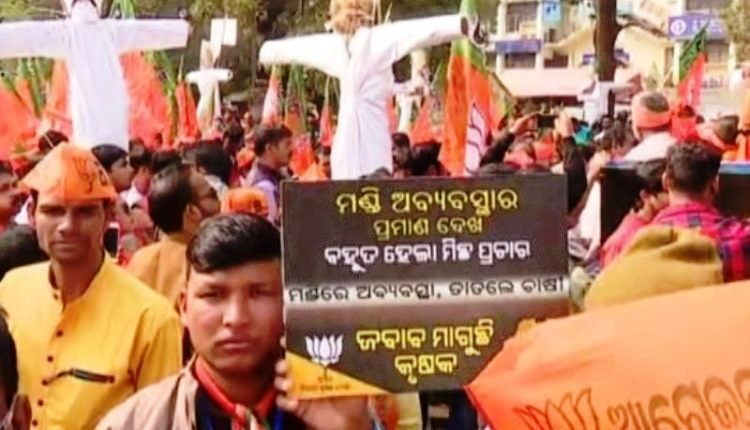 Bhubaneswar: Tension mounted high in the State capital after farmers and activists under the banner of BJP Krushak Morcha (BKM) scuffled with police personnel today when the former tried to enter the Secretariat here while staging a demonstration protesting irregularity in paddy procurement at different Mandis across the state.

Hundreds of party activists took to streets and later gheraoed the State Secretariat here today alleging that the State Government is not able to procure paddy from different Mandis at prices fixed by it. Holding party flags and raising anti-Government slogans, the activists also burnt effigies of CM Naveen during the protest. They also termed the ruling BJD’s protest over paddy MSP in New Delhi as a farce.

To maintain law and order and avoid any untoward incident during the protest, 40 platoons of police force were deployed near State Secretariat. However, the situation turned ugly when the BJP activists had a face-off with the cops when the latter tried to prevent the agitators from entering the Secretariat.

Later, the cops detained many party leaders, including BJP State vice-president Sameer Mohanty and senior leader Patap Sarangi from the protest spot.  Farmers from several districts across the State had joined the protest today.