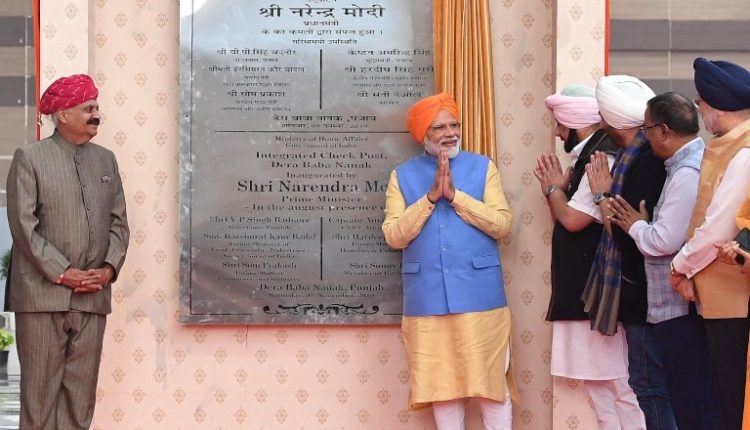 Dera Baba Nanak (Punjab): Prime Minister Narendra Modi on Saturday thanked his Pakistan counterpart Imran Khan for respecting the sentiments of India as he flagged off the first pilgrimage to Darbar Sahib in Pakistan after inaugurating the Kartarpur Corridor here.

“Visit to Gurdwara Darbar Sahib will become easy now,” Modi said at the Kartarpur Corridor inauguration event before opening the state-of-the-art Integrated Check Post for the corridor that connects Dera Baba Nanak shrine in Punjab’s Gurdaspur district with the historic Kartarpur Sahib Gurdwara across the border in Pakistan.

The corridor was inaugurated ahead of the 550th birth anniversary of Guru Nanak Dev, the founder of Sikhism, which falls on November 12.

“I thank all who have been associated with the construction of the corridor,” Modi said, adding that he also thanked “Imran Khan for understanding Indian sentiments with respect to the Kartarpur Corridor and worked in that direction within the timeframe”.

Donning a saffron turban, Modi, in his half-an-hour address at the function organised by the Shiromani Gurdwara Parbandhak Committee (SGPC), said the corridor and the Integrated Check Post would serve thousands of devotees daily.

“It is my honour to have inaugurated the corridor today. Guru Nanak’s teachings are being translated into various languages so that the next generation can also be enriched by them. We must vow to imbibe the preachings of Guru Nanak, which are still relevant,” Modi, who was bestowed with the ‘Kaumi Seva Puraskar’ by the SGPC, said.

“Every Sikh Guru, starting from Guru Nanak to Guru Gobind Singh, has made efforts for the unity, defence and security of India. It is this tradition which has been carried forward by the Sikhs in the Independence struggle and thereafter in protecting the country,” the Prime Minister said.

Expressing gratitude to UNESCO for helping in spreading the message of Guru Nanak Dev, Modi said that after the abrogation of Article 370, Sikh families in Jammu and Kashmir could also exercise rights like other Sikhs across the country to visit Kartarpur Sahib.

Modi also released a commemorative coin and stamp in the honour of Guru Nanak Dev.

Modi briefly interacted with Manmohan Singh, who was accompanied by his wife Gursharan Kaur.

Members of the SGPC and all the 117 legislators and MPs from Punjab were also part of the delegation.

Earlier in the day, Modi paid obeisance at the highly revered Sikh shrine in Sultanpur Lodhi.

Wearing a saffron scarf, Modi spent time at the Gurdwara Ber Sahib located along the banks of the holy ‘Bein’, which is connected with many events in the life of Guru Nanak Dev.

Meanwhile, Pakistan Prime Minister Imran Khan congratulated the Sikh community on the 550th birth anniversary of Guru Nanak Dev and said that the opening of the Kartarpur Corridor was a testimony to Pakistan’s commitment to regional peace.

He inaugurated the corridor in Punjab province in Pakistan.

“Want to congratulate those worked on the corridor,” Geo News quoted Khan as saying while addressing the inauguration ceremony in Kartarpur.

“I did not know my government was so efficient. Want to congratulate them again for completing the complex in record time,” he said.

Khan arrived at the corridor inauguration ceremony using the shuttle service being used by the pilgrims.

The Kartarpur shrine is the place where Guru Nanak Dev spent the last 18 years of his life.

India had signed an agreement with Pakistan on October 24 on the modalities for the operationalisation of the 4.2 km long four-lane Kartarpur Sahib Corridor at the Zero Point on the International Boundary.

The Union Cabinet passed a resolution on November 22, 2018 to celebrate the historic occasion of 550th birth anniversary of Guru Nanak Dev in a grand and befitting manner throughout the country and across the globe.

The Cabinet also approved the building and development of the Kartarpur Corridor from Dera Baba Nanak to the International Boundary to facilitate pilgrims from India to visit Gurdwara Darbar Sahib through out the year in a smooth and easy manner.

The 4.2 km corridor has been constructed at a cost of Rs 120 crore.

The state-of-the-art passenger terminal building is constructed on 15 acres of land. The fully air-conditioned building akin to an airport has over 50 immigration counters for facilitating about 5,000 pilgrims a day.

The agreement signed with Pakistan provides a formal framework for operationalisation of the Kartarpur Corridor.

However, the ticklish issue of a $20 service fee imposed by Islamabad remained unresolved. This means that each visitor will have to pay the service fee.