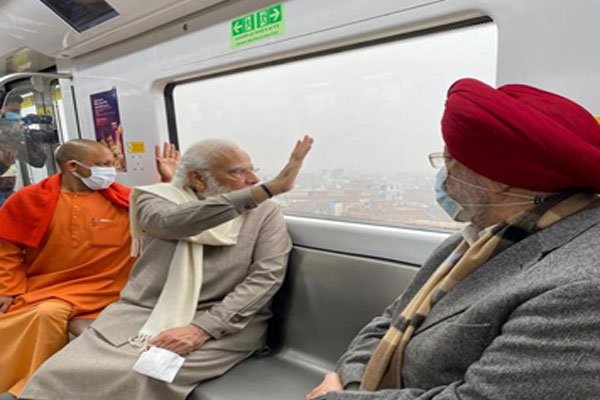 Kanpur: Prime Minister Narendra Modi inaugurated the completed section of Kanpur Metro Rail Project on Tuesday when he boarded the metro train at IIT Kanpur metro station and became the first passenger of the service.

He was accompanied by Union Minister Hardeep Singh Puri and UP Chief Minister Yogi Adityanath.

The Kanpur Metro Rail Project comprises two corridors and has a total length of 32.5 km.

The first corridor from IIT-Kanpur to Naubasta is 23.8 km long while the second corridor from Chandrashekar Azad Agriculture University to Barra-8 is 8.6 km long.

The daily metro services will be available from 6 a.m to 10.p.m. from Wednesday.

Initially, ticketing with QR code will be available and later on, smart cards will also be introduced for commuters.

The Kanpur Metro will run on the Priority Section from IIT-Kanpur to Motijheel with three coaches.

The entire stretch has been developed in accordance with the green building codes, which makes it safe for the environment.

All the nine stations of the Priority Corridor have been certified with platinum rating by the Indian Green Building Council (IGBC).

It was on November 15, 2019 that Yogi Adityanath had inaugurated the civil construction work of Kanpur Metro.

A trial run of the metro was held on November 10 this year.

COVID vaccination of kids in Odisha from Jan 3: Check eligibility & other details