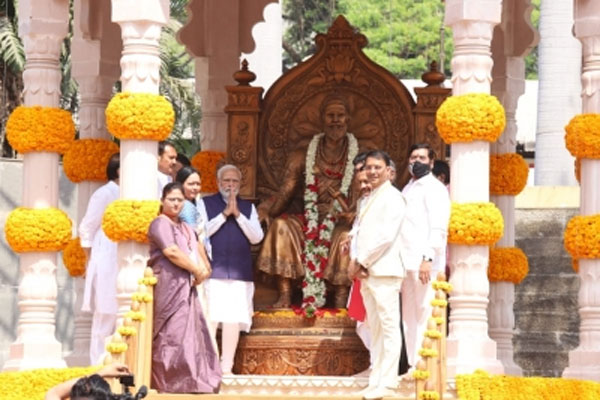 The PM bought a ticket from the ticketing counter, walked into the Garware Station and along with a group of school students took a ride on the Metro train to the Anandnagar Station.

The Pune Metro is coming up at a cost of over Rs 11,400-crore and is aimed at providing world-class urban mobility infrastructure for Pune.

Soon after his arrival, Modi unveiled a 9.5 feet tall statue of Chhatrapati Shivaji Maharaj in the Pune Municipal Corporation (PMC) complex, made of 1,850 kg gun metal.

With this, he became the first PM to visit the PMC 60 years after the then Prime Minister Jawaharlal Nehru had come here.

During the day, Modi will inaugurate an art gallery-museum at Balewadi, dedicated to the legendary cartoonist R.K. Laxman who passed away in January 2015.

The museum highlight is a miniature model based on the fictional village of Malgudi, which will be made alive through the audio-visual effect, cartoons with the famed ‘You Said It’ logo, drawn by Laxman will be showcased here.

Later he will lay the foundation stone of rejuvenation and pollution abatement projects of the Mula-Mutha River on a 9 km stretch slated to cost Rs 1,080-crore.

Under this, a total of 11 sewage treatment plants shall be built with a capacity of around 400 MLD.

The PM will also launch the Golden Jubilee celebrations of Symbiosis University and 100 e-buses and an e-bus depot at Baner.

The sorcerer of spin