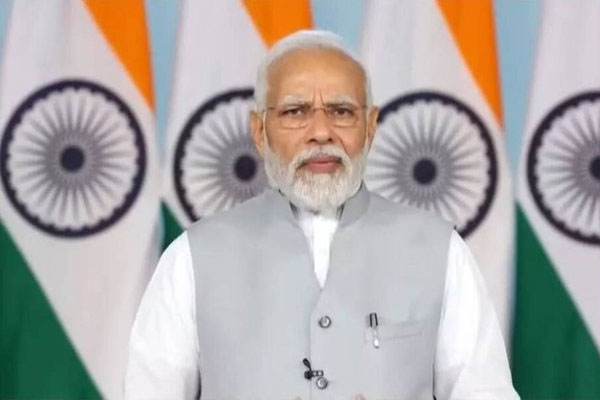 New Delhi: Prime Minister Narendra Modi on Saturday said that completion of the process of selection for lakhs of vacancies in a few months and issuing appointment letters is an indication of the change that the government system has undergone in the last seven-eight years.

He made these observations while inaugurating a Rozgar Mela virtually, where appointment letters were handed over to 75,000 newly inducted appointees.

Prime Minister Modi further said that the Government had provided assistance of more than Rs 3 lakh crore to MSME sector during the pandemic, which helped prevent loss of crores of jobs.

He informed said that the Centre is focussed on manufacturing and tourism sectors as they generate maximum jobs.

“Today marks the day when a new link in the form of Rozgar Mela is being anchored to the employment and self-employment campaigns in the country that are going on for the last eight years”, Modi said.

The Prime Minister said that keeping in mind the 75 years of independence, the Central government is giving appointment letters to 75,000 youngsters under a programme.

“We decided that a tradition of giving appointment letters in one go should be started so that a collective temperament of completing projects in a time-bound way develops in departments”, he said explaining the rationale of the Rozgar Mela.

“India is today the fifth largest economy in the world. In the last eight years, we have jumped to the fifth position from the tenth position. It’s true that many big economies of the world are struggling with inflation, unemployment… side effects of the biggest crisis in 100 years cannot just go away in 100 days,” Modi said in his virtual address.

He added that despite the challenges, “India, with full force, new initiatives and some risks, has been trying to save itself from the global crisis. We’ve been able to save ourselves till now with your cooperation. We have, in the last eight years, minimised the issues which created obstacles in our way”.

The Prime Minister recalled the days when applying for government jobs was a cumbersome process and favouritism and corruption were rampant in selections. He said that the steps during the initial years of his government, like self-attestation and abolition of interviews in Group C and Group D posts of the Central Government, have helped the youth.

The appointees will join the government at various levels i.e. Group – A, Group – B (Gazetted), Group – B (Non-Gazetted) and Group – C. The posts on which appointments are being made include Central Armed Force Personnel, Sub Inspector, Constable, LDC, Steno, PA, Income Tax Inspectors, MTS, among others,” a statement issued by the PMO said.

Youth electrocuted while fishing with live wire in Odisha’s Mayurbhanj