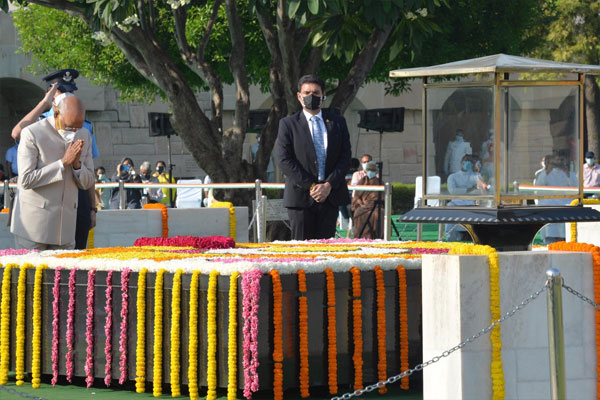 New Delhi: Prime Minister Narendra Modi on Friday paid homage to Mahatma Gandhi on his 151st birth anniversary and wished that the ideals of the Father of the Nation remain a guiding force helping in building a compassionate India.

The Prime Minister took to Twitter and wrote, “We bow to beloved Bapu on Gandhi Jayanti. There is much to learn from his life and noble thoughts. May Bapu’s ideals keep guiding us in creating a prosperous and compassionate India.”

Prime Minister Modi also shared a two-minute video hailing the principles of Gandhi. In the clip, he can be heard saying “Gandhiji never tried to create his influence through his life, however, his life became an inspiration in itself.” Modi also paid tribute to Mahatma Gandhi at the Raj Ghat.

Besides Mahatma Gandhi, Modi also paid tribute to former Prime Minister Lal Bahadur Shastri on his birth anniversary saying, he epitomised simplicity and lived for the welfare of our nation.

“Lal Bahadur Shastri Ji was humble and firm. He epitomised simplicity and lived for the welfare of our nation. We remember him on his Jayanti with a deep sense of gratitude for everything he has done for India,” he tweeted.

Meanwhile, President Ram Nath Kovind also took to the microblogging website to pay his homage to Mahatma Gandhi and said that people should take lessons from his life, particularly when we are facing a pandemic.

“Gandhiji himself never claimed to be a great soul, indeed, he went out of his way to tell the world about his vulnerabilities. Yet, he is the best example of realizing the maximum human potential,” the President said.

This constant effort to be a better human being and to be more sensitive towards those around him made him a Mahatma, the President said, adding that this path was, of course, extremely difficult. There were many failures along the way. But he continued doggedly, one step at a time.

“Gandhiji was more concerned about his duties than his rights, and took up cudgels on behalf of others — Dalits, peasants, labourers, women and others. Gandhiji shows, in great detail, what needs to be done — by individuals, organizations and nations — to achieve peaceful coexistence, sustainable development, economic and social equality,” Kovind further said.

He added, “The year-long celebrations of his 150th birth anniversary that culminate today have been an apt occasion to rejuvenate his memories and reorient the moral and ethical foundations of public life.”

Gandhiji has so much more to offer to us if we take lessons from his life, particularly when we are facing a pandemic, he said. “During the outbreak of a deadly plague, he flung himself into health care and sanitation duties that exemplified his selfless service.”

The President said that his 151st anniversary is a good occasion to think through our priorities in the light of Gandhiji’s life and thought, and prepare ourselves again to hear his voice in our hearts.

Ram Nath Kovind also paid salutation to former Prime Minister Lal Bahadur Shastri on his birth anniversary. “That great son of Mother India served the country with unprecedented dedication and integrity. All the countrymen remember him devoutly for the fundamental role in the Green Revolution and the White Revolution and for his strong leadership during the war,” he said.

Vice President M. Venkaiah Naidu also lauded Mahatma Gandhi’s teachings and said that it showed us the path of truth and love. “Remembering the Father of the Nation, Mahatma Gandhi on his birth anniversary today. Bapu, through his life and teachings, showed us the path of truth, love and selfless service to mankind. His idea of ‘Antyodaya’ guides us to work for the uplift of the last person,” he tweeted.

Union Home Minister Amit Shah also paid tributes to Mahatma Gandhi for his extraordinary personality and spiritual life, which showed the world the path of peace, non-violence and harmony.

“To fulfill their dream of increasing the use of Swadeshi, today the whole country is adopting Swadeshi with Modi ji’s resolve of self-reliant India. A tribute to him on Gandhi Jayanti,” he wrote on Twitter.