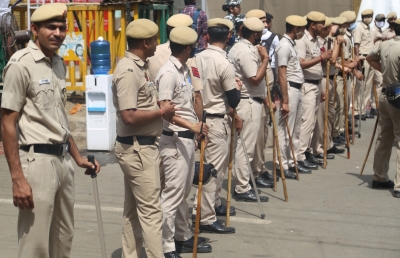 New Delhi: The Delhi Traffic Police on Monday issued an advisory for the general public asking them to avoid certain stretches possibly in wake of the Congress party’s continued protest against the government over its leader Rahul Gandhi’s interrogation by the Enforcement Directorate (ED) in the National Herald case.

“Kindly avoid Motilal Nehru Marg, Akbar Road, Janpath & Man Singh Road between 0800 hrs & 1200 hrs. Due to special arrangements traffic movement will not be possible on these roads,” the advisory read.

Meanwhile, Motilal Nehru Marg, Akbar Road, as well as the road in front of Udyog Bhawan, were completely blocked by the police by placing barricades.

Rahul Gandhi is scheduled to appear before the ED on Monday for a fourth time.

His appearance was initially scheduled for June 17, but the senior Congress leader wrote to the ED to postpone his questioning citing illness of his mother Sonia Gandhi.

Accepting his request, the probe agency asked him to appear on Monday.

For three consecutive days last week, Rahul Gandhi had been grilled for about 30 hours amid widespread Congress protests in the national capital against their leader being questioned.

He was reportedly questioned about a few transactions made by Kolkata-based Dotex Merchandise Pvt Ltd.

Sonia Gandhi, who is presently hospitalised with Covid related health issues, has also been summoned on June 23 in the same case.