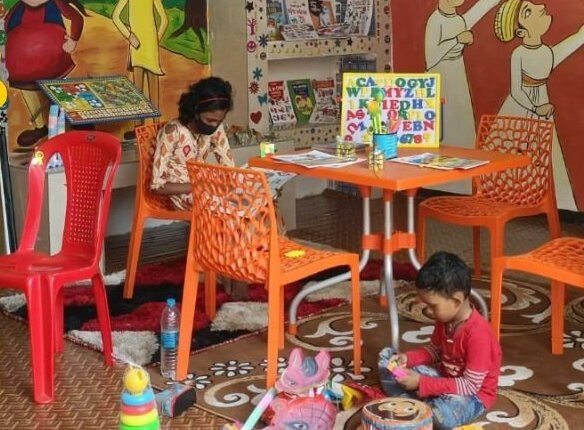 Sundargarh: In an exemplary move, the Sundargarh police launched a pilot project namely ‘Let’s Read’ on the occasion of Independence Day. Under the initiative, one reading-cum-activity centre was inaugurated at reserve police lines, Sankara. Along with books, magazines and other reading materials, this centre will also have internet connectivity to give access to e-learning for the children who wish to avail this unique opportunity. Apart from this, five police stations of the district will also have similar facilities.

Previously, under the ‘Ama Khusi, Ama Surakshya’ programme, ‘Anand Ghar’ was opened for children at Rajgangpur Police Station with the aim of providing a safe and happy place to any child coming to the police station as well as children in conflict with law. This initiative received a positive response from the general public and kids were seen using the facility eagerly. Taking this a step further, Anand Ghars were established in four other police stations– Kutra, Badgaon, Birmitrapur and Sadar.

Small corners of the Anand Ghars are now being given additional resources such as a computer system with internet connectivity along with books and other study materials to encourage children to read and stay engaged.

Key features of the initiative:
* A happy place (Anand Ghar) inside each police station premises with child friendly infrastructure, decor and toys.

* The Anand Ghar will also have child friendly activity materials including card and board games, colouring and sketch books etc.

* A library at each Anand Ghar to encourage kids across all age groups to read. The books will include fiction, non-fiction, bestsellers, encyclopedias in both English and Odia language.

* The library will also be equipped with newspapers, magazines and preparation materials for competitive examinations.

* An e-library is also being set up at each Anand Ghar which gives the kids access to a computer system and internet facility so that they can read, explore and utilize their time in more constructive activities.

* Periodic activities will be conducted at the ‘Anand Ghar’ which will include storytelling sessions, painting competitions, debates and speech competitions so on and so forth to engage kids and will give a positive picture of police in the minds of the children who are the torch-bearers of tomorrow.

* Trained manpower to cater to children in conflict with law, disturbed children or children whose parents are involved in criminal activities. The ‘Anand Ghar’ will function under the supervision of the Child Welfare Officer of the PS.

The first of its kind reading-cum-activity centre was inaugurated in the presence of Higher Education Minister Dr. Arun Kumar Sahoo, Sundargarh Collector Nikhil Pavan Kalyan and SP Sagarika Nath. Similar centres will be open to public at the police station premises of Rajgangpur, Kutra, Badgaon, Birmitrapur and Sadar. Subsequently, based on the receptivity and efficiency of the system, all other police stations will be taken up to be remoulded into a child friendly police station in close coordination with the district administration.

India needs to strengthen security at J&K borders in the wake of Taliban’s control in Afghanistan: Experts