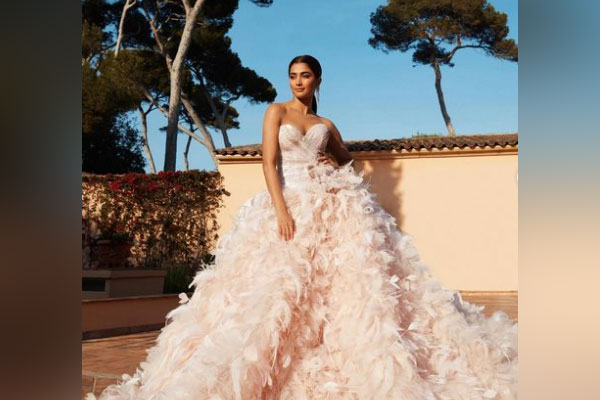 Hyderabad: Pooja Hegde, who made her Cannes Film Festival debut at the ‘Top Gun: Maverick’ premiere on Wednesday, was a sight to behold in an elaborate strapless ivory-hued feather gown that had an embellished bodice and a voluminous skirt. She paired this dazzling outfit with diamond danglers and a no-fuss ponytail.

The ‘Ala Vaikunthapuram Loo’ actress used the hashtag ‘Crafted in India’ when she posted pictures of her new look on Instagram, indicating that the look was created by an Indian designer.

She then expressed gratitude to Anurag Thakur for making it possible. She said, “I didn’t come with a brand; instead, I came with brand India. As an Indian actor, I’ve come to celebrate Indian cinema.”

Pooja Hedge talked about how walking the red carpet at Cannes is a dream in a video snippet.

At the 75th Cannes Film Festival, India is the ‘Country of Honour,’ led by Information and Broadcasting Minister Anurag Singh Thakur.

Pooja is among the 11 film personalities along with A.R. Rahman, Nawazuddin Siddiqui, R. Madhavan, Shekhar Kapoor, and Prasoon Joshi, who are members of India’s official delegation to Cannes.

Deepika Padukone, who is part of the jury of this film festival, joined the Indian delegation for the inauguration of the Indian Pavilion on Wednesday, the second day of world cinema’s most prestigious showcase.