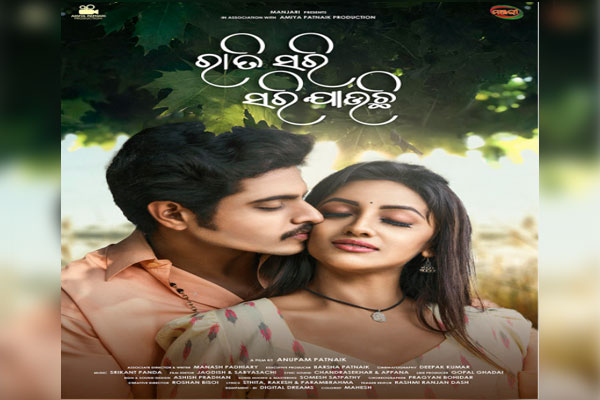 The movie will showcase the love story of a 90s couple. The lovebirds fail to enter a wedlock due to all the hurdles that came their way, which eventually forced them to part ways only to meet after eight years. What happened next, is what the movie narrates.

The screenplay of Raati Sari Sari Jauchi has been penned by Manash Padhiary and music has been composed by Shrikant Panda.

Actors Riya Dey, Raj Rajesh, Sukant Rath and Rai Mohan Parida will be seen essaying major roles in the upcoming movie. This apart, two new faces will make their debut in this movie.

Sharing the experience of completing the movie amid the COVID-19 pandemic, director Anupam Patnaik told Sambad English, “We started shooting in February this year adhering to COVID appropriate behaviour. The entire movie was shot in Pipili area of Puri.”

“Generally, it takes at least 15-20 days to shoot a film. But we completed shooting our movie in 12 days,” he added.

Anupam also mentioned that they were initially planning on a theatrical release of the movie. But, considering the current pandemic scenario, the makers decided to go for the world television premiere of the upcoming romantic movie on Manjari TV.

The trailer and songs from the movie will be out soon. Although an official release date for the movie has not been sealed yet, the makers are planning for release next month.

Tokyo Olympics Games to be played without spectators at venues