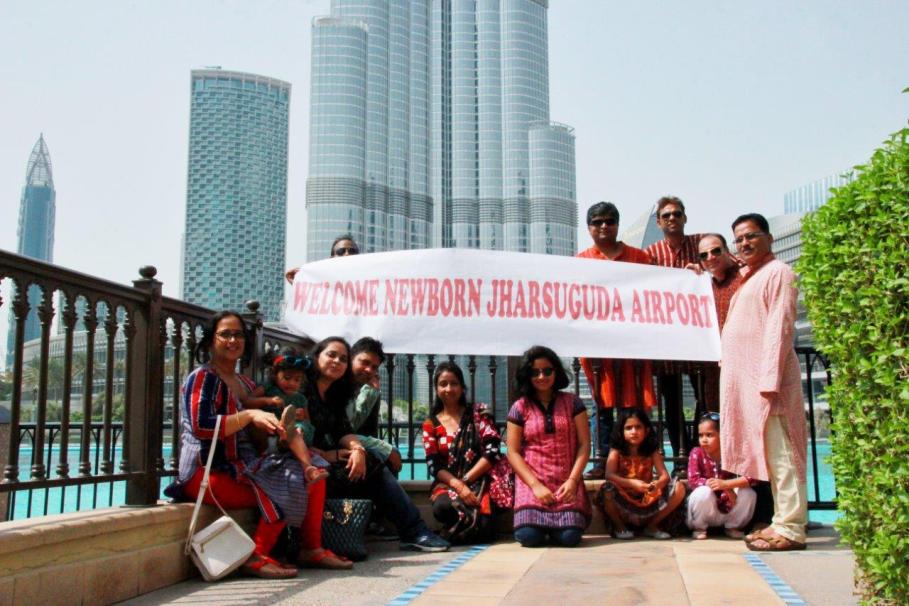 On the eve of inauguration of the airport by Prime Minister Narendra Modi, the Prabasi Western Odisha residents organised a celebration in front of the iconic landmark Burj Khalifa in Dubai to cheer the momentous occasion.

Dressed in traditional Sambalpuri attire, men, women and children cut a specially designed cake. All the families greeted each other and expressed joy on Jharsuguda joining the National Air Map.

The operation of the airport, which was named after freedom fighter Veer Surendra Sai, was a long pending demand of people of western Odisha. The need for the airport in Jharsuguda was particularly felt by the Non-residents.

People belonging to western regions of Odisha living in the UAE experience a long journey when they wish to make visit to their homeland. They book international flights to major airports like Delhi, Mumbai and Kolkata and then they wait for a connecting flight to Bhubaneswar or Raipur to reach their destinations.

However, their journey to reach their home towns does not end here. They have to again take a train or road journey, often running into 5-6 hours to arrive at their destinations in western part of the State.

With operation of the airport in Jharsuguda, people are now hopeful to have direct air connectivity from major cities like Delhi and Kolkata.

“This airport will connect the entire western region of Odisha with the World. Many businesses and institutions refused to be based in Sambalpur and its surroundings due to lack of air connectivity and this issue will be solved with the establishment of the Jharsuguda airport. This airport will indeed boost the economy of the region and will open new frontiers for business and education development in the region. Tourism will also get a big boost,” said a senior member of the Western Odisha Family, Priyadarshee Panigrahi, who is the General Manager of a leading consumer products company and is based in Dubai.

Another senior member of the community, Rajesh Tripathy, feels that the Jharsuguda airport will make the journey back home a smooth affair.

“Currently my home town Bargarh is a good 6-7 hours of road travel from Bhubaneswar. With this airport, I shall reach home within 2 hours,” he said.

Among the senior most members of the community, Manas Panda hopes that the airport will accelerate industrialisation and promote the economy of the region. “I feel this is the catalyst which will ignite development of the region,” he said.

Hailing from Bhawanipatna, Rajat Rath, a finance professional based in the UAE over a decade, feels the airport was a long overdue one. He strongly feels that Odisha needs more airports and even bats for another airport in the southern region. He feels many smaller countries in the world have airports at the distances of 150-200 kms and we should emulate them.

Subhendra Nayak, a construction professional, who has been living in Dubai for the past 12 years and belongs to Kuchinda, is overjoyed. The thought of flying directly to Jharsuguda from Delhi and then reaching Kuchinda within an hour of landing at the airport is a great feeling according to him.

Alokmay Behera from Sambalpur, who is an environmental consultant working out of Dubai for the past 10 years said that the air connectivity will significantly boost campus placements in various institutes like IIM Sambalpur and VSSUT Burla.

Many top recruiters were shying away from coming to various educational and professional institutes in the region because of the lack of connectivity according to him. Now this will not be the case, he said.

The Prabasi Odias are hopeful that the Jharsuguda airport will be the catalyst for the rapid development of the region and will ultimately improve the life of the people in a significant way.