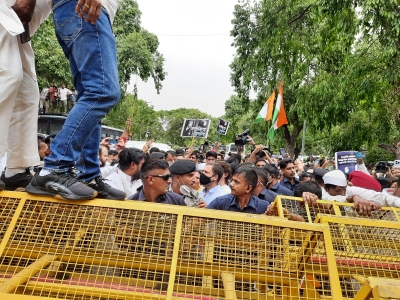 New Delhi: Amidst heavy security deployment, Congress leader Rahul Gandhi reached the Enforcement Directorate (ED) office in the national capital on Monday after he was summoned in connection with the National Herald case.

There was heavy police deployment in and around the ED office located at Dr APJ Abdul Kalam Road.

As he left the party headquarters at 24 Akbar Road, several Congress workers accompanied him.

The police however, did not allow them to move further and only Rahul Gandhi was permitted.

The Congress leader was also accompanied by her sister Priyanka Gandhi Vadra.

Earlier in the morning, hundreds of Congress workers reached the Congress headquarters to join Rahul Gandhi in their proposed march to the ED office.

As a precautionary measure, the police detained several party workers.

The traffic police also issued an advisory for the people asking them to avoid certain stretches from where the rally was supposed to pass.