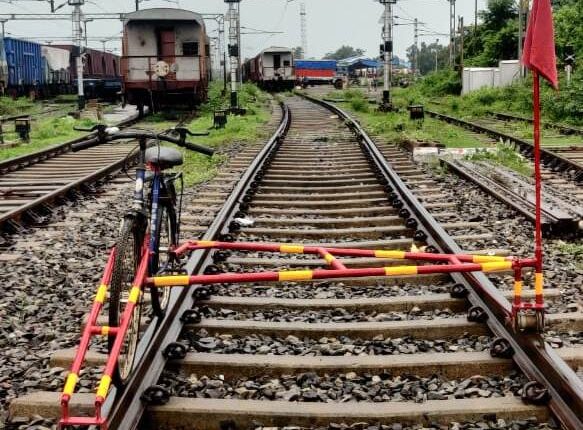 Bhubaneswar: In order to inspect, monitor and repair railway tracks, the Indian Railways has introduced an innovative Rail Bicycle which will help the Railway staff in daily monitoring of the rail tracks.

These Rail Bicycles were in-house prepared by Permanent Way (P-Way) units of Khordha Road division by using damaged rail dolly wheels for balancing the cycle which will be used for mobile patrolling.

The safety of Railway tracks primarily inspected/monitored and attended to, by track men round the clock irrespective of all odds be it night or day, rain or cold etc. Their movement was also volatile, insecure and was by walk only. Now with the invent of Rail bicycle which is capable of running on the tracks at an average speed of 10 KMPH, not only the movement of track man has become easier but also faster.

The Rail Bicycle will help the railway workers in all seasons. During monsoon seasons, sometimes the situation becomes very difficult, causing unwanted detention of train services. After a heavy shower, bridge approach locations and other vulnerable locations can be easily inspected by the staff in a short span of time with Rail Bicycle. In emergency situations, the bicycle will be very helpful for patrolling during hot weather also.

These Rail Bicycles can run at an average speed of 10 KM per Hour and at a maximum of 15 KM per Hour. It weighs just around 30 kgs, can easily be lifted, assembled and dismantled by one person.

Due to the ongoing COVID-19 pandemic, some of the sections over the division are currently closed for the traffic. In these sections, Rail Bicycle can be used for patrolling, ensuring safety and security.