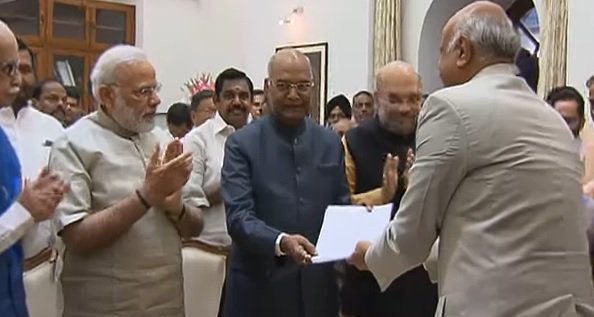 New Delhi: NDA candidate Ram Nath Kovind on Friday filed his nomination here for the July 17 Presidential elections and pledged to uphold the dignity of the country’s top constitutional post.

Kovind, 71, filed the papers in the presence of Prime Minister Narendra Modi, BJP President Amit Shah and Chief Ministers of states ruled by the Bharatiya Janata Party and its allies as well as parties backing him.

Kovind filed three set of nomination papers. BJP leaders said another set will be filed on June 28, the last date for filing nominations in the election which will see the former Bihar Governor take on opposition candidate and former Lok Sabha Speaker Meira Kumar.

A former BJP MP, Kovind told the media after filing his nomination that he has had no party affiliation since he became the Bihar Governor after Modi took power in New Delhi in 2014.

“The President’s post carries a lot of dignity. My effort will be to keep the post above party politics. I promise I will try my best to uphold the dignity of this office. The Constitution is supreme and it is our duty to maintain its supremacy,” he added.

Kovind said the President was the supreme commander of the armed forces. “It is our priority to secure the borders of our country.”

Kovind thanked Modi, the NDA Chief Ministers and others for supporting his candidature.

Naidu said Kovind deserved to become the next President. “Now everyone needs to support his candidature. The opposition will lose,” he said.

As he walked to the room of the Returning Officer, Kovind folded his hands to greet his supporters. Earlier, he and Modi joined hands and some BJP leaders raised their hands together to indicate his impending electoral victory.

Kovind is widely expected to sail through the Presidential election.

The NDA, including the Shiv Sena and the PDP of Jammu and Kashmir, commands the support of 48.93 per cent in the electoral college made up of MPs and MLAs.