Rath Yatra to be held in Ahmedabad on July 12 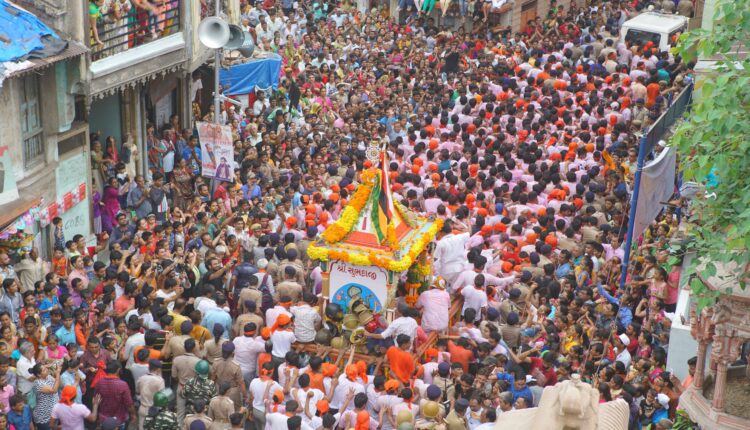 Gandhinagar: Gujarat Home Minister Pradipsinh Jadeja on Thursday announced that the state government has decided to permit the Ahmedabad Rath Yatra with provision for curfew on the route and a ban on Prasad distribution on July 12.

“With the constant efforts of the health department officials and the Gujarat government, we have been able to bring down the number of corona infections in the state. Right now the recovery rate is more than 98.54 percent and the positivity rate is 0.1 percent. We had only 65 positive cases in the state and not a single death reported yesterday. During the last 24 hours, there were only 2 positive cases in Ahmedabad and the recovery rate was 98.5 percent,” Jadeja told reporters.

“Looking at all these and understanding the sentiments of the public to carry on the ancient ritual, we have decided to permit this year’s Rath Yatra in a limited fashion,” said Jadeja.

“Although, the Gujarat government has given the permission for the Ahmedabad Rath Yatra, we request the public to stay indoors and have ‘Darshan’ watching it live on television,” added Jadeja.

“Union Home Minister Amit Shah will attend Mangala Aarti at the Mandir in the morning, while Chief Minister Rupani will perform Pahind ceremony in the presence of Deputy CM Nitin Patel and only a limited number of people will be allowed,” said the minister.

Jadeja informed that only five vehicles consisting of ‘Nishan’, ‘Danka’, three Raths and the Mahant/Trustee’s vehicle will be allowed to participate in Rath Yatra.

“Khalasi youths, who conventionally pull three Raths, will be required to be vaccinated and RTPCR negative,” said Jadeja, adding that a total of sixty youths will be pulling the three chariots.

“Local authorities will ensure a strict curfew along the entire shortened 19 kilometre route of the Yatra which will have to be finished in five hours,” added Jadeja.

How Olympic bound V.Revathi sprinted her way out of poverty; read about her inspiring story