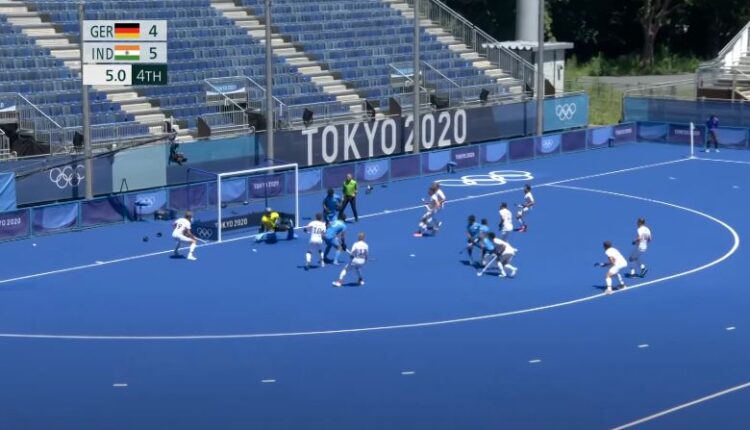 Tokyo: The Indian Men’s Hockey Team played with all their heart to bring the entire nation joy on a memorable Thursday as they scripted history with a fantastic 5-4 win against a fighting Germany in the Bronze medal play-off match here at the Oi Hockey Stadium. This victory ended the country’s 41-year medal drought at the Olympic Games and has scripted India’s resurgence in global hockey. It was Simranjeet Singh (17′, 34′), Hardik Singh (27′), Harmanpreet Singh (29′), Rupinder Pal Singh (31′) who scored while PR Sreejesh came up with some outstanding saves in the dying seconds of a historic win at the Olympic Games Tokyo 2020.

Earlier in the game, Germany played out the first quarter with incredible pace in their attack and displayed their intent to put India on the backfoot right from the start. Tactical play inside India circle by Timm Herzbruch who pushed the ball to Florian Fuchs. He in turn setup Timur Oruz to score Germany’s first goal in the 2nd minute of the match. Though India had an opportunity to equalise in the 7th minute when they earned a PC but it was fired away wide from the target by Rupinder Pal Singh. India’s goalkeeper Sreejesh, on the other hand, made a brilliant save in the 10th minute when he stopped Mats Grambusch from scoring a field goal to extend Germany’s lead.

A charged-up German attacked continued to play with pace and precision testing India’s defence all through the first quarter.  They made yet another ambitious attempt at goal in the 12th minute through Johannes Grosse and in the 15th minute Germans used a referral just after the hooter to win their first PC. There were three retakes given following some brave blocking by Amit Rohidas in India’s defence. Lukas Windfeder taking a flick could not convert from these chances.

The second quarter saw a flurry of goals being scored between the two teams. While India equalised in the 17th minute when a brilliant counterattack from India led by Nilakanta Sharma made a delightful pass to Simranjeet Singh who put it past German goalie Alexander Stadler.

It was an important equaliser that put India back in the hunt. But Germany earned back the lead in the 24th minute. Nilakanta this time had given away the ball cheaply in the midfield that led to German’s attack. It was Christopher Ruhr who made a quick-fire pass to Niklas Wellen who launched the ball into the goal post.

Germany pumped another goal within the next minute when defender Surender Kumar lost the ball to German’s double tackle inside the circle. Germany punished India for this error with Benedikt Furk scoring the third goal for Germany taking their lead to 3-1.

India bounced back soon enough with Simranjeet earning a PC in the 27th minute. It was experienced Rupinder Pal Singh taking the flick, and though keeper Stadler made a brilliant save, India’s Hardik Singh was quick to take a rebound to successfully put it past the keeper.

Narrowing the German lead to 3-2, India played to their potential by winning another crucial PC in the 29th minute. This time, Harmanpreet Singh does exceedingly well to score his 6th goal of the tournament and fetching a very important 3-3 equaliser for India.

The 10-minute Half-time break was followed by a superb goal for India in the 31st minute through a PC. Germans lost the referral in the process and Rupinder Pal Singh converted a splendid penalty stroke putting India ahead with 4-3 score line.

India scored again in the 34th minute when Harmanpreet Singh was at the heart of a counterattack with his long scoop pass, Gurjant Singh showcased his brilliant stick work making a quick run into the right flank. He entered the circle to set up Simranjeet Singh who completed the attack with a fine deflection. This attack brought back memories from India’s Junior World Cup campaign in 2016 that brough the talent of this trio – Gurjant Singh, Simranjeet and Harmanpreet Singh to the fore. The third quarter continued to be action packed with both teams trading PCs. But India did well to hold on to the 5-3 lead.

The final quarter remained tense with Germany scoring a goal off a PC in the 48th minute. This time it was Windfeder who scored for Germany. India gave away another opportunity for Germany to score when an early tackle by Sreejesh when Ruhr was going for a shot resulted in India conceding a PC. But Sreejesh made amends for the mistake with an excellent save to keep India in the driver’s seat. The final few minutes was absolutely thrilling with Germany pushing for an equaliser. Germany won their 13th PC with less than 10 secs on the timer but India’s defence held on, PR Sreejesh on target to bring home the Bronze Medal.