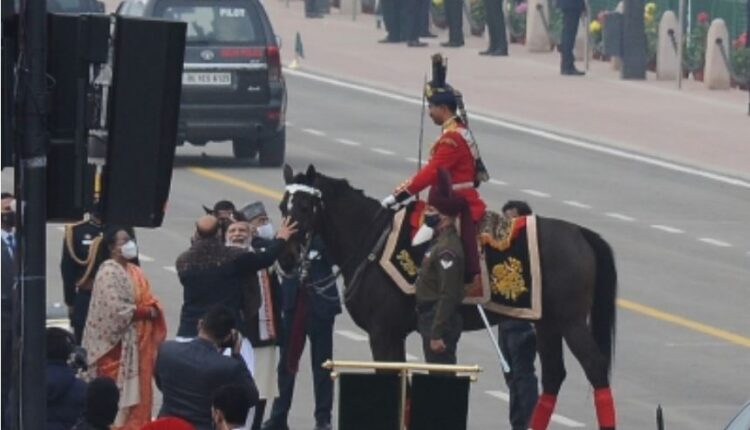 New Delhi: ‘Virat’, an elite member of President Ram Nath Kovind’s Bodyguard, and a veteran who has been a part of over 13 Republic Day parades, retired from the service on Wednesday.

Virat, a hanoverian breed horse, was, recently on the eve of Army Day on January 15, and was awarded the Chief of Army Staff Commendation for his exceptional service and abilities.

Notably, Virat was the first charger horse of the President’s Bodyguard (PBG) to receive such a commendation card.

According to officials, Virat is a veteran of over 13 Republic Day parades as a charger escorting the President of India.

“Today was his last Republic Day parade as he gracefully retires after being the most trusted steed over the years,” the official said.

On Wednesday, during the Republic Day celebrations at the majestic Rajpath, President Kovind and Prime Minister Narendra Modi bid farewell to the elite horse.

PM Modi was seen on camera patting and showing his love for the esteemed member of the PBG.

The PBG, raised in 1773, is the senior most regiment of the Indian Army.

The unit maintains stringent physical standards by ensuring the fittest men only above 6 feet are enrolled.

To match the built of these fine troopers of the President, the horses too are of a minimum height of 15.5 hands height, the tallest held by any mounted unit, in the country.

These magnificent horses of the elite PBG are bred by Remount Veterinary corps and presently looked after by 44 Military Veterinary Hospital.