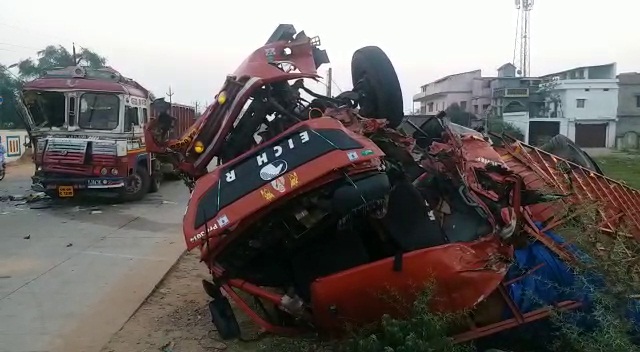 Bhubaneswar: As many as four persons lost their lives in three separate road accidents in Odisha today.

A bus and a motorcycle collided head-on on Nayagarh-Daspalla road late last night killing two persons who were travelling on the bike. While one of them died on the spot, the other one sustained critical injuries and was taken to the Daspalla community health centre, where he succumbed to his injuries.

The deceased have been identified as Biswajeet Pradhan of Harabhanga area in Boudh and Krushna Nayak of Jayapatana in Kalahandi. Both were in an inebriated state when the mishap took place, reports said.

In another incident, a head-on collision between two trucks on NH-26 near Sudapada in Balangir district killed a truck driver who was present on roadside on the wee hours of Wednesday.

The deceased, identified as Sartaj Singh, was on his way to Jharsuguda driving a coal-laden truck from Punjab. Around 3 AM, he parked the truck on roadside and alighted from the vehicle to replace a damaged tyre with a new one.

In the meantime, two trucks collided head-on near the spot and one of the trucks ran over Sartaj killing him on the spot.

In Nabarangpur district, a bus carrying several persons to a wedding party rammed into a tree killing the driver and leaving more than 20 people injured.

BJD, other regional parties to be key to govt formation: Survey

33% seats for women a tribute to Gandhiji: Odisha CM