Bhubaneswar: A WhatsApp forward message mentioning discontinuation of Rs 2000 banknote from January 2020 went viral and created a buzz among the users.

The message stated that from December 31, 2019,  usage of Rs 2000 notes will be discontinued in the country and to replace it, the Reserve Bank of India (RBI) will introduce Rs 1000 banknote post-January 1, 2020. The message added that RBI has not printed Rs 2000 note in the current financial year and it has confirmed so through a right to information (RTI) query. 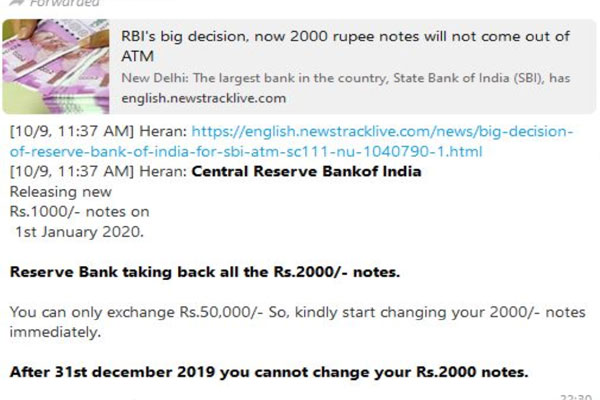 The viral message also included an article from a news website that said that RBI had directed the State Bank of India (SBI) to remove large note cassettes from its ATMs and urged people to get replace their Rs 2000 notes as soon as possible. However, after proper official digging and cross-checking facts, it is found that the message was a hoax and the RBI has issued no such notification.