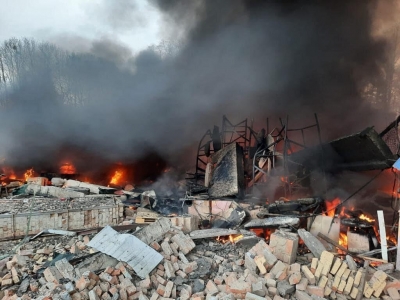 New Delhi: Ukraine has made claims that Russian forces have attacked orphanages and nurseries in the country, Sky News reported.

Ukraine’s Foreign Minister Dmytro Kuleba said on Twitter (which has been translated into English): “Today’s Russian attacks on kindergartens and orphanages are war crimes and violations of the Rome Statute.

“Together with the Office of the Attorney General, we are collecting these and other materials, which we will immediately transfer to The Hague. Responsibility is inevitable,” Sky News reported.

A reporter on the ground has also claimed to have images from the alleged attack on a kindergarten – which was being used at the time as a shelter.

The European Union will freeze bank accounts of Russia’s President Vladimir Putin and foreign minister Sergey Lavrov in the bloc but will not issue a travel ban, Austria’s foreign minister has announced, Sky News reported.

Alexander Schallenberg said: “There will be no travel ban against them, though, because we want to retain the possibility of negotiations in order to end the violence in Ukraine.”

He made the comments as he arrived for a meeting of EU foreign ministers in Brussels, confirming an earlier report in the FT.

‘This might be the last time you see me alive’, Ukraine President warned EU leaders

Petrol, diesel prices can rise by over Rs 6 per litre with hike in crude oil price: ICRA