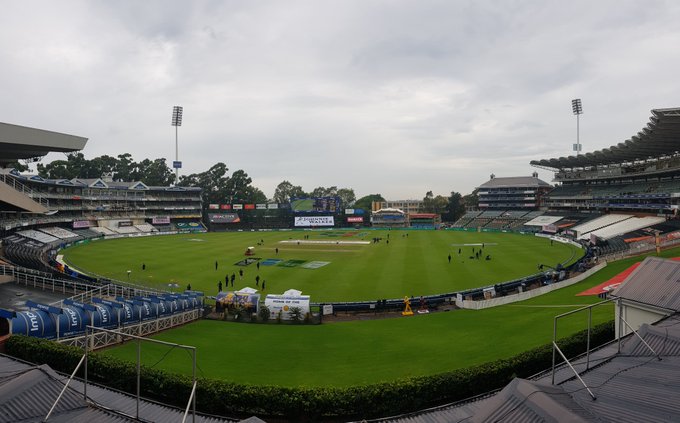 Johannesburg: Dean Elgar spearheaded a record chase of 240, helping South Africa clinch a series-levelling win over India in the second Test at the Wanderers here on Thursday.

After rain washed out on-field action of the first two sessions, rain gods relented for 34 overs of play to happen. That was enough for Elgar, unbeaten on 96, to finish off the chase of 240, which is also South Africa’s highest successful chase at this venue.

South Africa’s batters batted fantastically and stitched partnerships on a tricky pitch as India’s bowlers had a rare off-day with the ball. The seven-wicket loss also meant that India’s record of not losing a Test match to South Africa at the ‘Bullring’ came to an end, just a week after the tourists breached Fortress Centurion.

The hosts’ were also helped by the fact that India conceded 11 wides, six leg-byes and one no-ball on day four.

Jasprit Bumrah began the proceedings with a jaffa to square up Rassie van der Dussen. But Elgar, who took lots of body blows on day three, continued his gutsy stay at the crease by drilling Ravichandran Ashwin through left of mid-on to raise his half-century.

Bumrah and Shami got some deliveries to kick up and trouble the duo of Elgar and van der Dussen. After van der Dussen leant into an extra cover drive off Bumrah, the ball was changed. But it did little to give India respite as van der Dussen hit Shami for successive boundaries on both sides of the wicket followed by giving the same treatment to Shardul Thakur.

Eventually, it was Shami who broke the 82-run partnership off 160 balls, taking out van der Dussen with the one moving away and the right-handed batter, trying to defend and edged to Cheteshwar Pujara at first slip.

Despite losing van der Dussen, South Africa steadily marched towards the target with Elgar being rock-solid at the crease. India almost had Temba Bavuma’s wicket if Shardul Thakur hadn’t dropped a return catch off his own bowling.

After drinks break, Elgar continued to deal in boundaries, hitting Shami for back-to-back fours as the tension started to ease on the hosts. Temba Bavuma joined the run-making spree by driving Bumrah twice through covers.

Elgar then launched a stunning onslaught on Mohammed Siraj, smashing him for three boundaries through mid-on, point and backward point. Bavuma’s splendid pull off Thakur over backward square leg before Elgar finished off the chase with a whip through mid-wicket off Ashwin to push the three-match series into a winner-takes-it-all decider at Cape Town from January 11.