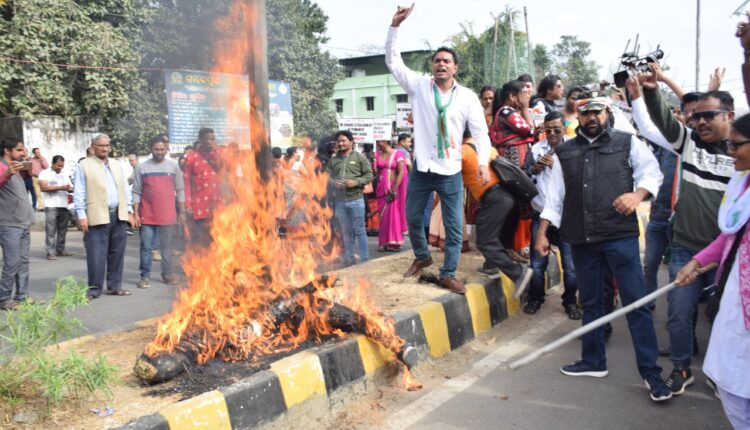 Bhubaneswar: The BJP MPs from Odisha today wrote to Chief Minister Naveen Patnaik urging him for release of the arrested lawyers who were involved in the vandalism on the premises of the Sambalpur District Court during agitation over the demand of establishment of Orissa High Court’s permanent bench in Sambalpur.

They also requested the Chief Minister to take up the matter with the Bar Council of India to revoke the suspension of licenses of the lawyers in the interest of the litigants.

“We would like to state that the Union Law Minister has made statements in Parliament again and again for an agreeable resolution towards establishment of the permanent bench of Odisha High Court in the Western Part of Odisha. Besides, he has often written to the State Government to hold consultations with the Hon’ble Chief Justice of Odisha High Court and the Hon’ble Governor of Odisha for mooting a composite proposal to the Ministry including its exact location, jurisdiction along with their commitment to provide proper infrastructure and to bear the recurring expenses so as to enable the Government to bring in a legislation in both the Houses of Parliament for the establishment of a permanent Bench of Odisha High Court in the Western Odisha,” the MPs said in the letter.

“The delay and lack of commitment of the State Government of Odisha neither in holding consultation with the Hon’ble Chief Justice of Odisha High Court and Hon’ble Governor of Odisha nor providing the Composite proposals sought by the Union Law Ministry has led to the present unpleasant law and order situation leading to the arrest of dozens of lawyers in Sambalpur and suspension of licenses of 43 odd lawyers for one and half year and suspension of the license of all the lawyers of Sambalpur Bar AssOciation till further order,” they said.

“This has further precipitated the volatile situation and total collapse of the Court work of Sambalpur Judgeship due to non-availability of local lawyers who are either in Judicial cUstody or their licenses have been sUspended, creating very difficult situations for the poor litigants of the area,” the parliamentarians mentioned.

“In view of the facts and circumstance as outlined in above, the State Government being squarely responsible for the entire unfortunate incident, we demand that the State Government of Odisha must address the insiant unprecedented situation without any further delay by releasing the arrested lawyers and take up the matter with the Bar Council of India to revoke the suspension of licenses of the lawyers in the interest of the poor litigants as well as restoration of peace, tranquillity and conducive healthy atmosphere in the State of Odisha,” they concluded.

Notably, the accused lawyers had allegedly resorted to vandalism inside the chamber of a district judge.

1 dead, over 40 hurt as passenger bus overturns in Odisha’s Mayurbhanj