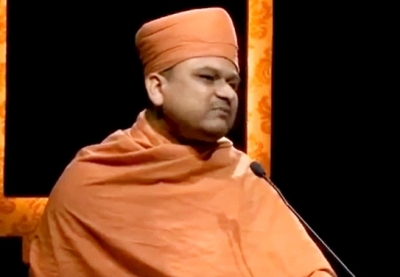 Urging the state to take strict action against him, they said the sadhu did so to influence his followers and establish his sect guru’s Prabodh Swami supremacy over Lord Shiva.

While addressing his followers, the Swaminarayan Sect Sadhu Anand Sagar Swami had said that his guru Prabodh Swami appeared before his disciple. “When the devotee was standing at the gate, Lord Shiva happened to arrive and was requested by the disciple to seek Guru Prabodh swami’s blessings. Saying that he is not blessed enough to see Prabodh swami, Lord touched the disciple’s feet.”

Dissatisfied with the apology, the Sanatan sadhus and followers are demanding strict action against Swaminarayan Sadhu.

Brahma Samaj leader Milan Shukla has filed an application with Rajkot B division with request to file a complaint against Sadhu Anand Sagar under section 298 of the Indian Penal code, said Shukla.

“This is not the first time that sadhus from the Swaminarayan sect have insulted Sanatan religious lords, in the past they insulted Lord Vishnu, Lord Brahma and even the Lordess. I demand action against Swaminarayan sadhu Anand Sagar,” Sanatan Sadhu from Gorakhnath panth Jotirnath Swami asserted.

Suresh Raina retires from all formats of cricket