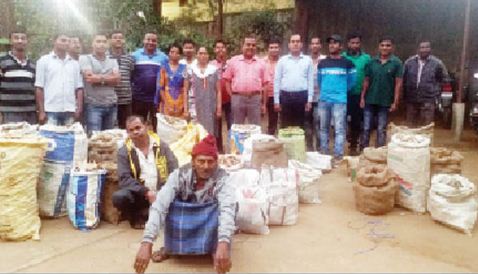 Koraput: Forest officials busted an inter-state sandalwood smuggling racket with the arrest of one person and seizure of 489 kg sandalwood from here yesterday.

The arrested smuggler was identified as Nimain Bal, a resident of Pujariput village under Padua police limits of Koraput district.

While forest officials seized 388 kg sandalwood from his home, the remaining quantity was seized near the village.

The accused has confessed to the crime admitting that the sandalwood seized from his home was to be transported to Kolkata.

According to reports, Nimain was allegedly purchasing sandalwood at Rs 500 per kg from various locations in Koraput and selling it in other States at double prices.

Acting on a tip-off, a team of forest officials raided his home on Friday night and seized 20 sacks containing sandalwood from there.

The team also found seven sacks sandalwood weighs around 101 kg near the village.