Sandy tribute to Karunanidhi in Odisha 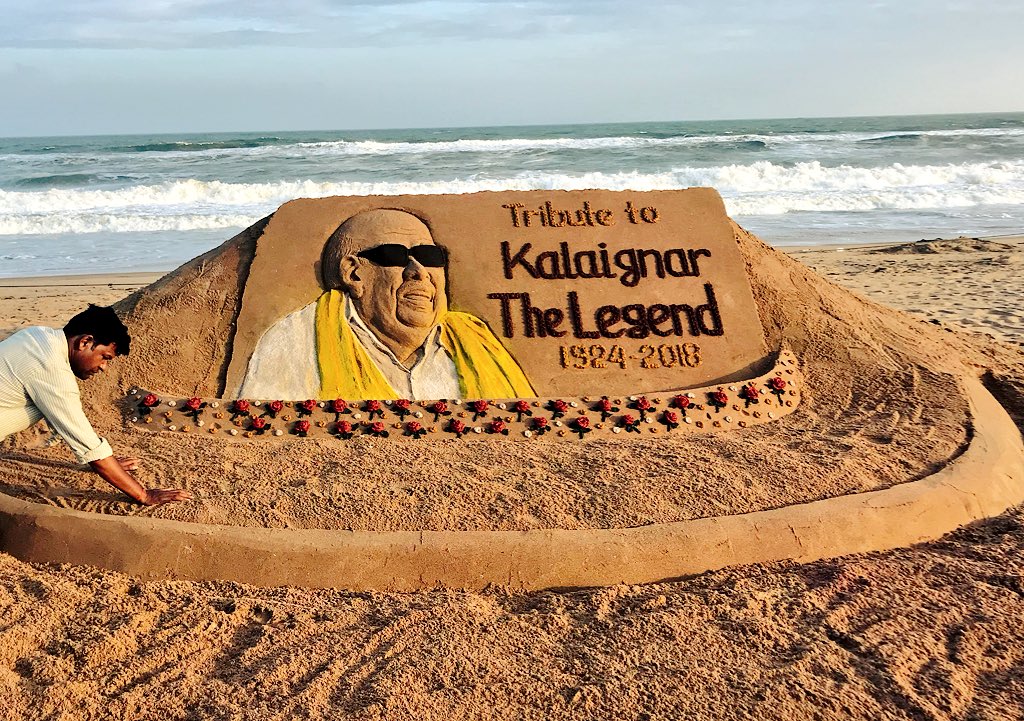 Puri: Well known sand artist Sudarsan Pattnaik today created a huge and beautiful sculpture of DMK President and former Tamil Nadu Chief Minister M. Karunanidhi on the Puri beach in Odisha to pay tribute to the legendary leader.  Karunanidhi was laid to rest at Marina beach in Chennai, next to Anna memorial this evening.

A large number of tourists and residents gathered on the beach to lay flowers near the sand art.

“My Sand Art with message Tribute to Kalaignar #Karunanidhi The Legend at Puri beach,” Pattnaik said in Twitter.

My SandArt with message Tribute to Kalaignar #Karunanidhi The Legend at Puri beach , #Odisha pic.twitter.com/zvqfxiFGyD

Soon after Pattnaik posted his sand art on Twitter, it went almost viral garnering thousands of likes and over hundreds retweets within one hour.

Odisha’s Finance Minister Sashi Bhusan Behera went to Chennai to pay his last respects to the late leader at his residence.

Chief Minister Naveen Patnaik has also expressed his grief over Karunanidhi’s death, saying the DMK patriarch was the “tallest” leader of Tamil Nadu.

Karunanidhi, who led the DMK for the past five decades, was the Chief Minister for 19 years spread over five tenures, died yesterday evening at Kauvery Hospital in Chennai.

Karunanidhi laid to rest on Marina by his mentor’s side