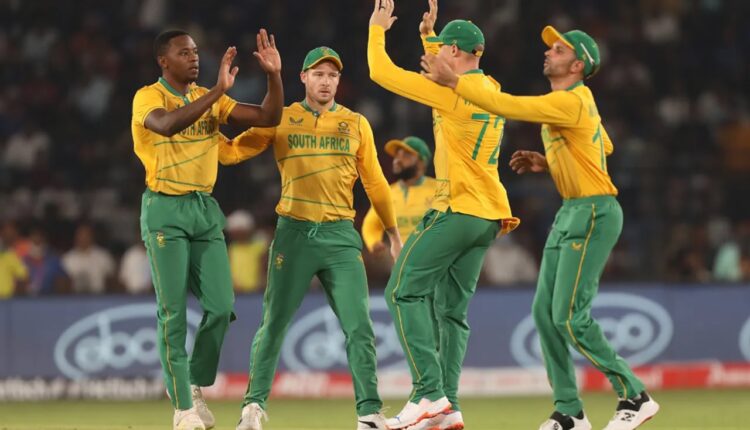 Cuttack: Team India lost to South Africa by four wickets during the second match of the five-match T20I series at Barabati Stadium in Cuttack today.

Proteas managed to achieve the target of 149 runs by losing six wickets in 18.2 overs.

A disciplined bowling performance helped South Africa restrict India to 148/6 despite Dinesh Karthik’s late flourish (30 not out off 21) in the second T20I.

Apart from Karthik, Shreyas Iyer (40 off 35), Ishan Kishan (34 off 21) were the main scorers as most of the Indian batters failed to deliver against Proteas bowlers and lost wickets at regular intervals.

Put into bat first, India had a bad start as opener Ruturaj Gaikwad was dismissed by Kagiso Rabada in the very first over of the innings. Shreyas Iyer then joined Ishan Kishan in the middle and it was not easy for both Indian batters as Proteas pacers were bowling hard lengths on a two-paced Cuttack pitch.

India got a bit of a move on in the fourth over, with Nortje bowling a couple in Ishan Kishan’s arc and he whipped them over the legside for sixes. The left-hander continued his aggressive approach and took India to 42/1 at the end of the powerPlay.

However, in the next over, Nortje bowled a shot pitch delivery to Kishan, who was late on the pull and offered a dolly to square leg, going back to pavilion after a breezy 34 off 21.

Unlike Delhi, where Proteas skipper Temba Bavuma brought spinners in the first over, he kept spin away for 8 overs here. In the ninth over, left-arm spinner Tabraiz Shamsi was introduced and went for 14 runs after Iyer hit him for a four and a six. But, Keshav Maharaj showed smartness in the next over, bowled outside off at an onrushing Rishabh Pant (5) who mistimed his slog to the sweeper cover fielder, leaving India to 68/3 in 9.1 overs.

From there on, the onus was on Hardik Pandya and a settled Iyer to take India forward. But, Bavuma brought Wayne Parnell back into the attack and the pacer bowled a ball with the angle to knock Pandya’s stumps down.

Very soon, Iyer nicked off a Dwaine Pretorius delivery, which was caught by Klaasen behind the wickets. India still had hopes from Dinesh Karthik and Axar pair — the last recognised pair to take their team to a competitive total. But Axar (10) couldn’t do much, got out to Nortje in the last delivery of the 17th over, leaving India tottering at 112/6.

It was eventually, Kartik, who used his finishing skills well and along with Harshal Patel (12 not out) scored 30 runs in the last two overs, taking India to 148/6 in 20 overs. Anrich Nortje (2/36) was the most successful bowler for South Africa while Kagiso Rabada, Wayne Parnell, Dwaine Pretorius, Keshav Maharaj picked one wicket each.