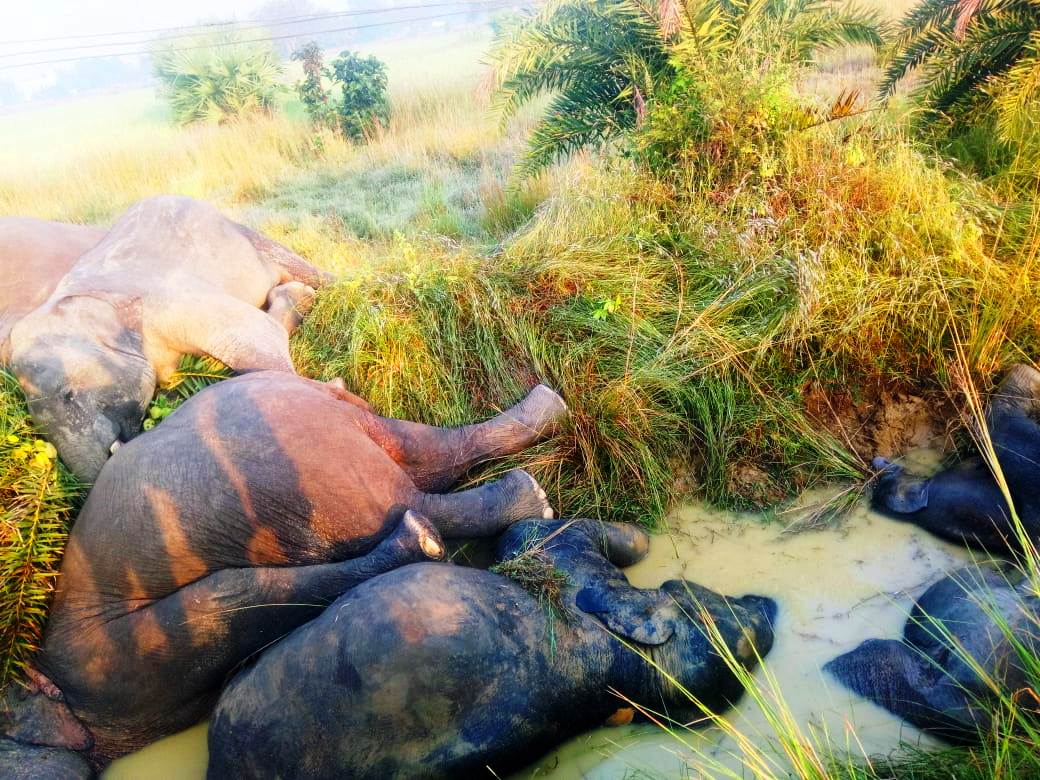 Dhenkanal: In a tragic incident, as many as seven elephants were electrocuted after coming in contact with a live wire at Kamalanga village under Sadar Forest Range in Dhenkanal district last night.

The carcasses of the pachyderms were found lying in a nullah in the locality this morning.

Sources said an overhead electric wire was hanging loosely for a railway track near the village. Late last night, around 13 pachyderms were crossing the railway track in the forest, when seven of them came in contact with the electric wire and died on the spot.

On receiving information, Parjang forest officials reached the spot and recovered the carcasses.

Blaming the electricity department for the mishap, Principal Chief Conservator of Forest (Wildlife) Sandeep Tripathy said, “For the first time, as many as 7 elephants died in the State in a single mishap that occured due to non-rectification of sagging lines and non-cabling of transmission lines.”

In a press release, he stated that last year, the Dhenkanal DFO had informed the Executive Engineer of CESU to rectify transmission line of 11-KV from Kamalanga to Kaliataila of Meramundali section of Dhenkanal Forest Range. The DFO had also submitted the proposal for cabling of transmission line in Kamalanga area. However, no action was taken in this regard.

“In the coordination meeting held under the chairmanship of Additional Chief Secretary, Forest & Environment Department on March 29, 2018, it was decided that the electric transmission line going through the elephant movement area should be invariably insulated in new cases and for older transmission line, the replacement should be phase wise,” the release read.

Accordingly, the Dhenkanal DFO had submitted a stretch of 136.57 kms of LT lines passing through vulnerable areas for cabling. In the coordination meeting held on September 24 with the Energy Department, the CESU officials informed that the cabling of transmission line is yet to be taken up in Dhenkanal Division of Angul Circle although the lists of transmission lines for cabling were submitted to the Energy Department six months back, the press release added.

Meanwhile, Dhenkanal Collector Nikhil Pawan Kalyan sought reports from CESU, Energy Department and Forest Department. “We will take action on the basis of reports,” he said.

Energy Department Secretary Hemant Sharma said a three-member team has been formed to investigate the incident and  action will be taken against persons to be found responsible for the mishap.