ODISHA LATESTTOP
By Sambad English Bureau On May 1, 2020
Share

As per an order of the district administration, all villages of Rusuda panchayat, Likhiria village, Deogaon village and Deogaon panchayat have been sealed and declared as containment zone.

The following villages have been declared as Buffer Zone: 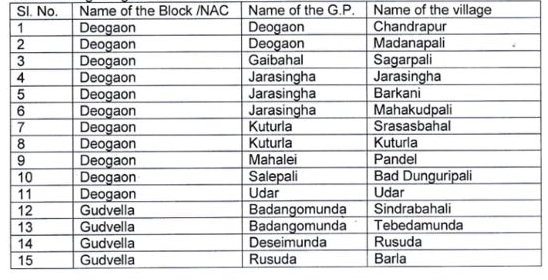 The following points around containment zone have been declared as sealing points.

“All vehicular movement, movement of public transport and personal movement shall be stopped in the containment zone. All the inhabitants within the containment zone shall strictly remain in home. All the shopping establishments of whatsoever nature shall be closed immediately. The supply of essentials and medical requirements shall be ensured by the Sub-Collector, Balangir. All the passes issued during lockdown to different persons for various kinds of work is hereby cancelled,” the order said.

On the other hand, State Rapid Response Team led by an Additional Director has proceeded to Balangir to strengthen surveillance and containment activities, Health Department said.

COVID-19 lockdown extended by two weeks till May 17