Several injured as bus plunges into river in Odisha 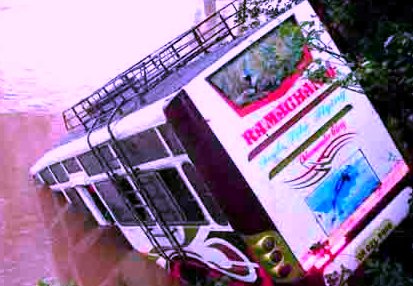 As many as 12 persons were injured after the bus in which they were travelling plunged into Mahanadi river near Dankari Sahi under Gania block of Odisha’s Nayagarh district this morning.

According to reports, the bus was carrying 20 passengers from Chamundia to Kurala. The driver of the ill-fated vehicle lost control over the wheels as the handle axis of the bus broke near Dankari Sahi following which it fell into the river. Fortunately, the bus didn’t drown completely.

The injured persons were admitted to Gania hospital for treatment. Five of them were shifted to the district headquarters hospital as their condition deteriorated.