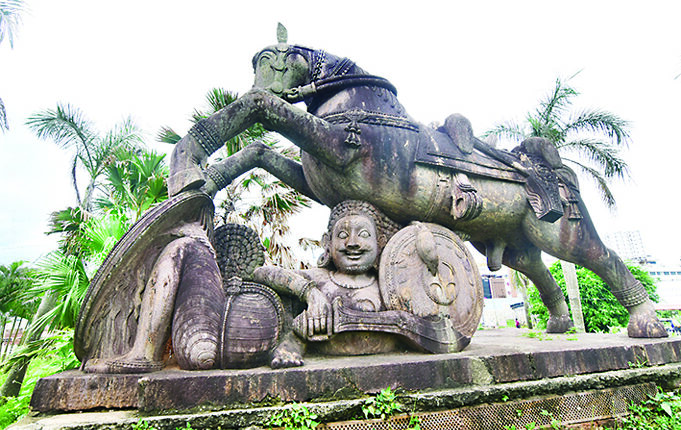 Bhubaneswar: The shifting of iconic replica of the famous sculpture of the Sun Temple at Konark showcasing a warrior with the horse in Bhubaneswar for the ongoing Smart Janpath project stirred a fresh row.

As per decision by the State Government, the ancient stone work built by late eminent sculptor Padma Vibhushan Raghunath Mohapatra and installed at the Master Canteen Square, will be shifted to Raj Bhawan Square.

The Bhubaneswar Smart City Limited (BSCL) had proposed relocation of the sculpture for a multi-modal hub project at the Bhubaneswar Railway Station. The proposal was approved at a meeting chaired by Ranjan Das, the Director of Culture, on June 8. 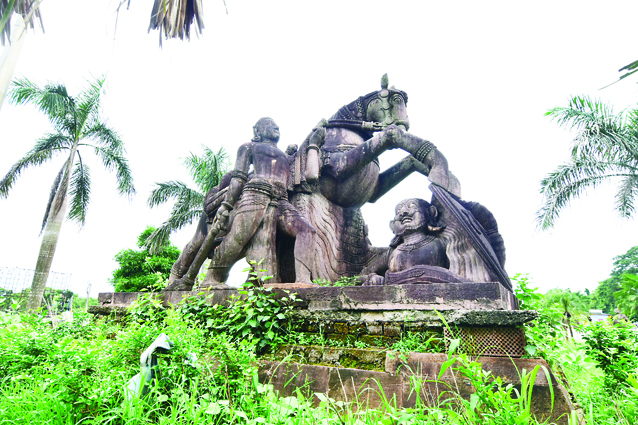 However, the move for relocation of the warrior-horse replica, which is a landmark of the State Capital, drew sharp reactions from different quarters.

The politicians and dignitaries including artists and sculptors have questioned how the decision was made to remove the iconic replica, which has been the identity of Bhubaneswar for decades.

“The warrior-horse statue is the identity of Master Canteen Square. Padma Vibhushan Raghunath Mohapatra had built the sculpture financed by Indian Oil at expenses bore by Indian Oil. Its carvings are unique. The government needs to respect the architecture of an artist. To date, it has not been properly maintained. If it is relocated to Raj Bhawan Square, its identity will be lost. Therefore, let it stay at Master Canteen Square. If the government cannot figure out as to how and where to place it, take our advice. Let the sculpture be placed here like the statue of Shivaji on horse has been erected in Mumbai. Don’t destroy the uniqueness of the statue by relocating it to another place,” said renowned sand artist Padma Vibhushan Sudarsan Pattnaik.

Opposing the decision, former Bhubaneswar Municipality Chairman Dr Jagannath Mohapatra, said, “Development or beautification should be made without causing damage to identity of a place. Are the officers, who are planning to shift the iconic statue, aware of the fact that who had kept the sculpture and why?”

“It is conspiracy to remove it without  knowing the fact that under which circumstances the statue, which is the symbol of Odisha Government, was erected here. Are they removing the Jagannath Temple in name of beautification work in Puri? the veteran questioned.

Veteran singer Padma Shri Prafulla Kar opined not to make any modification to the symbol of place.

“Earlier, those who came by train or bus and alighted at the Master Canteen Square, they identify the place as the ‘Horse Square’ (Ghoda Chhak). Even today, many people of ancient time call it the Ghoda Chhak. Hence, the Master Canteen Square is also known as the Horse Square. So, dont change the sign of one place. If it were to be relocated, many would not be able to see this famous monument. May all development work be made out but not to detriment of our identity,” the noted singer said.

Reacting to the decision to shift the ancient sculpture from Master Canteen to another place in Bhubaneswar, the Jatni legislator Suresh Kumar Routray threatened to stage protest against the move.

“The iconic horse stands as a symbol of the capital city and our State at the Master Canteen Square. The stone statue was erected after Bhubaneswar received the recognition of the Capital of Odisha in the year 1948. This is our identity. It will never be allowed to be removed from here. If the government will do so, we will stage mass protest against it. If the government wants to set up a business centre, do it anywhere else, we don’t mind,” Senior Congress leader said.

The Bhubaneswar Development Authority (BDA) had erected the sandstone sculpture at Master Canteen square around 1988.

Despite being a landmark of the Capital City, the statue has been lying neglected for several years. The place on which the sculpture stands is covered with wild. The beauty of the sculpture has been damaged due to lack of maintenance. The original warrior and horse sculpture is found at Konark Sun Temple. It is also found at the centre of official logo of Odisha Government logo.

Odisha +2 Results 2021: Marks to be awarded on basis of Matric exam score!