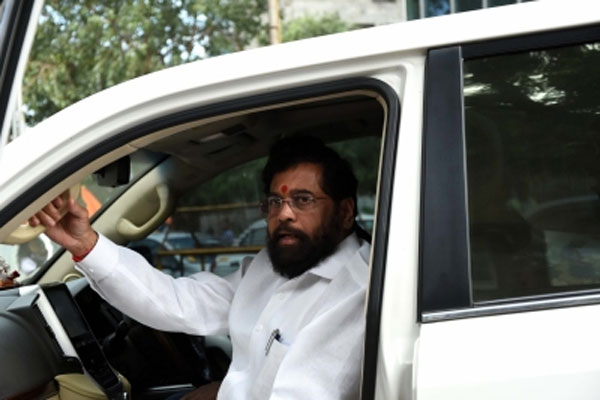 Share
Mumbai: Currently in the eye of a brewing political storm, senior Shiv Sena leader and Minister Eknath Shinde made a telling tweet indicating his ‘rebellious’ mood, here on Tuesday.

“We are Balasaheb (Thackeray)’s staunch Shiv Sainiks. Balasaheb has taught us Hindutva. We have never and will never compromise on the teachings of Balasaheb and ‘dharmaveer’ Anand Dighe for power,” said Shinde in a tweet in Marathi.

Significantly, he has knocked off the Shiv Sena logo from his Twitter handle, which was noted by the Maha Vikas Aghadi (MVA) allies.

The Sena hit back by sacking Shinde as the party leader in the legislature and replacing him with a loyal sainik, Ajay Chaudhari this afternoon.

While preparing to join hands with the Opposition Bharatiya Janata Party (BJP), Shinde has kept a lifeline open with the MVA with proposals and counter-proposals changing hands between Maharashtra-Gujarat.

Nationalist Congress Party President Sharad Pawar made it clear that there is no need for a leadership change in Maharashtra.

Pawar also said Shinde never expressed his desire to become the Chief Minister, but made it clear that its an internal issue of the Sena and Chief Minister Uddhav Thackeray would handle the matter and sort it out.

Congress Minister Ashok Chavan and senior leader Prithviraj Chavan declined to comment on the Sena’s internal matter, but admitted that the MVA faced a crisis, while NCP’s Minister Chhagan Bhujbal expressed optimism that the political storm would clear in a day or so.

The BJP leaders have been hinting that a ‘change of government’ in the state is inevitable, though no top leaders are officially commenting till the undeclared ‘Operation Lotus’ is a success.