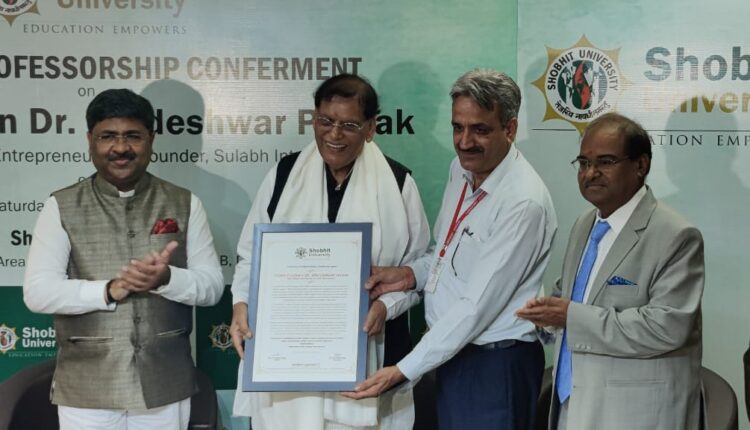 Bhubaneswar: Today, in a program organized by Shobhit University Gangoh, Dr. Bindeshwar Pathak, a world-renowned Indian social worker and entrepreneur and honored with civilian honors like Padma Bhushan, was conferred the honorary degree of Professorship. Sulabh International was founded in the year 1970 by Dr. Bindeshwar Pathak. This organization is a leading organization working mainly in the areas of human rights, environmental cleanliness and non-traditional sources of energy and social change through education.

The program started with deep lighting in the traditional manner. Thereafter Dr. Prashant Kumar welcomed all the dignitaries. In his address, he gave a brief life introduction of Dr. Bindeshwar Pathak ji and while congratulating him said that he accepted the honorary degree conferred by the university.

On accepting the honorary professorship on this auspicious occasion, Dr. Bindeshwar Pathak first expressed his thanks and gratitude to Shobhit University and Chancellor Mr. Kunwar Shekhar Vijendra ji for giving him this honorary professorship. He told that in the year 1967, he started his social concern as a campaigner in the Bihar Gandhi Birth Centenary Celebration Committee. After this, in the year 1970, on the suggestion of Shri Shatrughan Sharan Singh, Sulabh Toilet Institute was established. He expressed happiness that this campaign started from Bihar and reached abroad till 1980. “Gandhi ke bina desh ka vikas nahi ho sakta” says Mr. Pathak, he also added “It was my dream to become a professor and my dream has come true” He told in his address that in the year 1980, the name of the organization became Sulabh International Social Service Organization,” Mr. Pathak also added.

While addressing the program, Chancellor of Shobhit University, Shri Kunwar Shekhar Vijendra ji first thanked Dr. Bindeshwar Pathak ji for accepting the honorary degree of professorship conferred by the university. The Chancellor said that Dr. Pathak has always been known for his bold actions to bring about a radical change in the society. Even the subject of his research, he chose a bold and challenging topic like all accessible resources for Bhangi liberation and cleanliness. Shri Pathak’s determination inspired him to establish an organization like Sulabh International. The Chancellor told that born in a traditional Brahmin family and grew up in Bihar, Dr. Pathak did his Ph.D.

The area of ​​study was chosen as “all accessible resources for Bhangi liberation and cleanliness” and also did extensive research in this direction. In 1968, Shri Pathak was associated with the Bhangi liberation program and then experienced this social evil and the pain associated with it. Shri Pathak’s determination inspired him to establish an organization like Sulabh International and he launched a unique movement in the history of India in 1970. Since Shobhit University Gangoh lies under rural areas, now having Mr. Pathak among us is like cherry on top as we look forward to more such collaborations with him as a part of our team.

Find out the foods which can improve brain health, sharpen memory