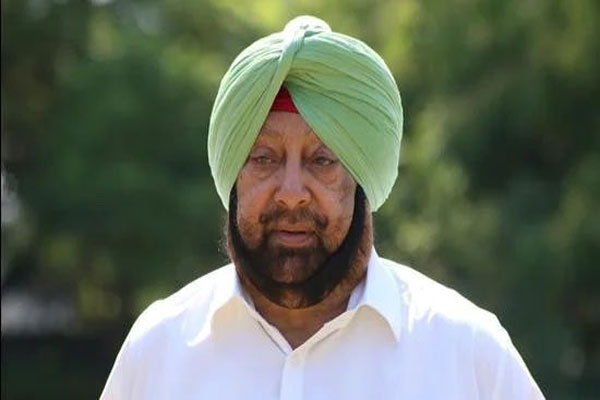 Chandigarh: Slamming the state government for its repeated denial of any serious security issues, former Punjab Chief Minister Amarinder Singh on Wednesday said there was something wrong and dangerous happening at the borders, which the state could ill-afford to ignore.

He trashed allegations that the Border Security Force (BSF) would take over the state’s administration or will be deployed in the Golden Temple, and said such misconceptions were being spread by certain people to score brownie points in the run-up to the Assembly elections.

Addressing a press conference here, Amarinder Singh said he was not an alarmist but his experience in the Indian Army and as chief minister of the state told him that “something is going to happen”.

“Yet a home minister who has been in his chair for one month claims to know more than me!” he quipped, taking a dig at Sukhjinder Singh Randhawa.

“Sleeper cells of the Pak ISI and Khalistani forces are creating trouble, technology is becoming more advanced. The capacity and range of drones is increasing, first they came in just 5-6 kms from the border, now they reach 31 kms,” he pointed out.

“We have to be very careful of the clandestine war from across the borders,” he added.

It was the duty of every responsible government to tackle such threats, Amarinder Singh stressed, countering those who mock his concerns over national security. The state government, he said, should put the facts before the people and take their help in getting information instead of denying the danger.

It should own up and take necessary action to combat the threat, he said, adding that even at the all-party meeting held on the issue, it seems the political parties were not properly briefed.

While Punjab Police was a first-class and well-trained force, they were, however, not trained to combat such threats, said the former Chief Minister, asserting they need the help of the BSF and the CRPF to tackle the problem.

He pointed out that even in the days of terrorism, the army was helping out and nobody took over the state government’s job. The BSF’s assistance was essential to maintaining peace in Punjab, he said, adding the state has been through tough times and nobody wants it to suffer again.

Similipal National Park to reopen for visitors from Nov 1