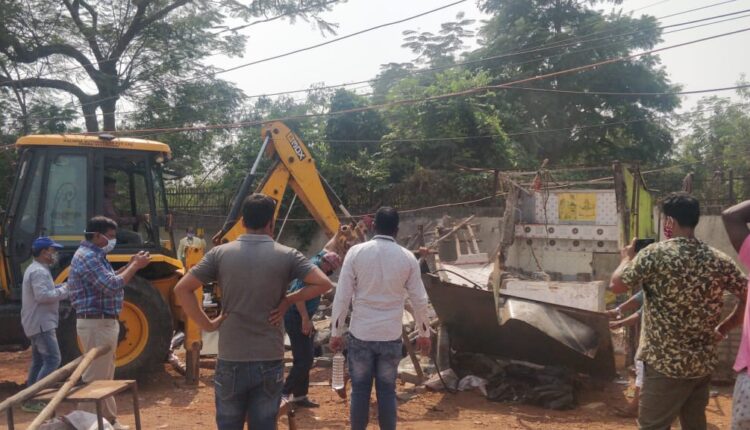 Bhubaneswar: It is a step forward to go ahead with the preparatory work for setting up of cultural corridors in the Capital City. As a spade work, the squads under the leadership of Additional Commissioner Abanikanta Pattanaik evicted seven old shops despite protest by the vendors.

Although the vendors have already been allotted kiosks in the Smart Janpath, they were unwilling to relocate and demanded their kiosks in the same place where the Bhubaneswar Municipal Corporation (BMC) has planned for the ‘Cultural Corridor’, a one-of-its-kind initiative, in the city to promote Odisha’s rich and diverse art and culture while boosting livelihoods of many people.

The Cultural Corridor will provide a platform to the underprivileged people and some of the gifted artisans of the State and give access to a larger market at the city level.

The Additional Commissioner held a discussion with the agitating vendors on the spot. They were told kiosks will be allotted to them in one area but not in the stretch where the cultural corridors will come up.

Later the shops were evicted as the vendors understood the objectives of Cultural Corridors.

Zonal Deputy Commissioner Ansuman Ratha, who was present during the eviction, said the stepping stone of the project was laid.

6 indoor plants that can induce sleep