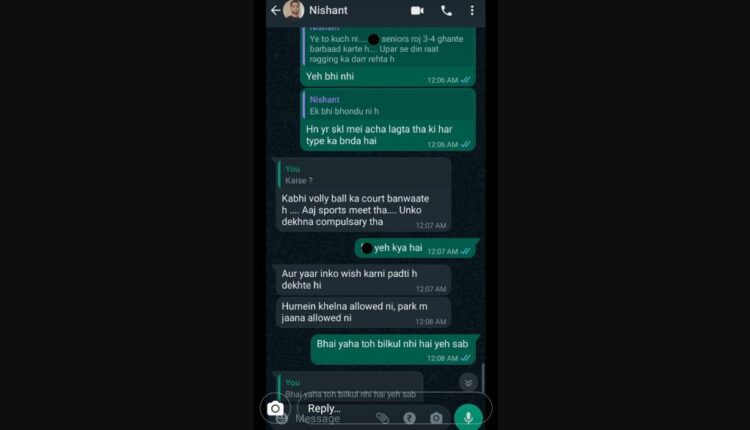 Balangir: In a major development in the case of death of Bhima Bhoi Medical College student Nishant Kumar of Haryana, who fell off the roof of a hostel at the educational institution, WhatsApp chat between him and his friend has surfaced bringing a sensational twist to the incident.

On the other hand, the father of the deceased lodged a complaint with the Balangir Town police yesterday alleging that his son was ragged and harassed from April 13 onwards, for which he took the extreme step of ending his life.

He urged the police to file a case against the anti-ragging cell of the medical college claiming that inability and carelessness on the part of the authorities led to the death of his son.

Acting on the complaint, police have registered a case under Sections 306 and 34 of the IPC and started investigation.

Notably, Nishant fell off the roof of the hostel on April 22. He was rescued and rushed to the hospital, where doctor declared him dead.

The incident took place when Nishant went to the roof after having lunch. He had taken admission into the medical college a month ago and was residing at the New Boys Hostel of the educational institution.

Ukraine will withdraw from talks if our people are killed or referendum is held in Mariupol: Zelensky