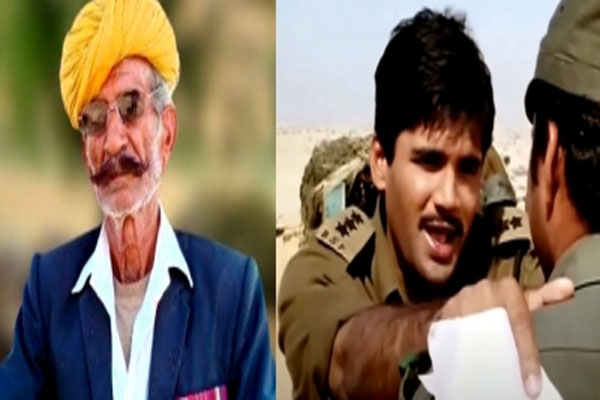 Mumbai: Naik Bhairon Singh, the war hero of the 1971 Battle of Longewala between neighbouring nations – India and Pakistan, passed away recently in Jodhpur at the age of 81. He was portrayed by actor Suniel Shetty in the 1997 film ‘Border’.

Bhairon Singh, a BSF jawan inflicted heavy casualties on the Pakistani side after the operations room of 12 Infantry division received a telegram, warning that Pakistan may launch a coordinated attack at the border outpost on December 3 or 4, 1971.

The official handle of BSF, shared the news of its war hero passing away via Twitter.

“DG BSF & all ranks condole the passing of Naik (Retd) Bhairon Singh, Sena Medal, the hero of #Longewala battle during 1971 War. BSF salutes his intrepid bravery, courage & dedication towards his duty. Prahari parivar stands by his family in these trying times. #JaiHind”, the tweet read.

Suniel Shetty immortalised Singh with his portrayal of an army man who endlessly loves his ‘Bharat Maa’.

‘Border’, directed by J. P. Dutta, starred an ensemble cast and was released in 1997 to widespread commercial success with many of its songs gaining a cult status and becoming a regular on country’s Republic Day and Independence Day playlist.

Smartphone makers may be forced to bring back removable batteries