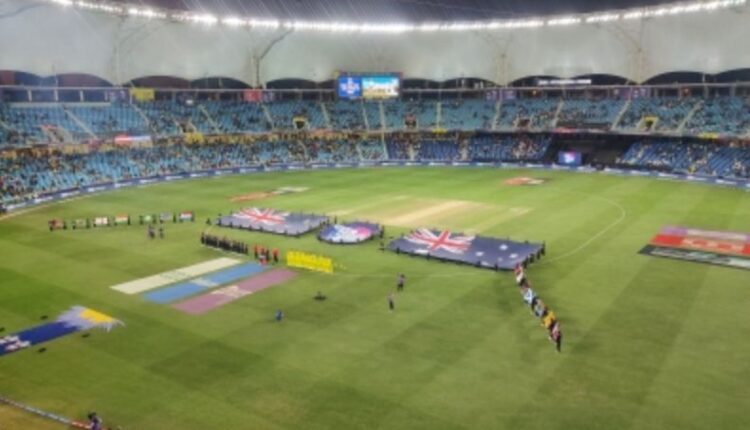 Dubai: With Trans-Tasman rivals Australia and New Zealand facing each other in the final of the ICC Men’s T20 World Cup on Sunday, the empty seats at the Dubai International Stadium did not match up to the excitement expected for a summit clash.

Generally, for a tournament finale, especially of an ICC event, there is always a shortage of match tickets but the final between New Zealand and Australia is a shocking affair in this regard. The empty patches everywhere in the stands should be a cause of concern for the International Cricket Council (ICC), Board of Control for Cricket in India (BCCI), and Emirates Cricket Board (ECB).

As per reports, the organisers had sought permission from authorities in the United Arab Emirates (UAE) to allow them to fill the stadium to 100 percent capacity for the final of the mega-event, and the same was granted. But, perhaps the absence of an Asian team in the final, resulted in there being not enough interest among the fans to come out and fill the stadium, this creating an electrifying atmosphere.

In contrast to the ongoing T20 World Cup final. some matches of the tournament in which an Asian country was in action saw a much better crowd turnout. Even there was a stampede-like situation with fans trying to force their way into the stands for Afghanistan versus Pakistan Super 12 clash a few days back.

During Afghanistan’s match against Pakistan in Dubai, ticketless Afghan fans attempted to force their way into the stadium, resulting in the authorities closing the gates which meant that many fans, with valid tickets, were prevented from entering. While the security cordon tried its best to keep non-ticket holders away from the entrance, the large number of fans seemed hellbent on entering into the stadium to witness the Afghanistan players in action.

The International Cricket Council (ICC) had asked the Emirates Cricket Board (ECB) to conduct an investigation into the incident and take notes from it to ensure it doesn’t happen again. And now, there is a situation, where very few fans are interested in watching the final from the stands.

There could be multiple reasons for the low turnout — limited presence of Aussie and Black Caps fans for the mega-clash is also one of them.

Australia has one of the hardest Covid-19 restrictions in the world. Last week, they eased international border curbs for the first time during the pandemic, but only for its vaccinated public from states with high levels of inoculation. However domestic travel is still hindered, as most states and territories have kept internal borders shut. This could be the main reason for Australian fans not travelling in big numbers to lend their physical support in the T20 World Cup.

Though New Zealand has recorded very few Covid-19 related deaths, the country’s government has adopted a tough response to the pandemic, including hard lockdowns and tight border controls.

On Saturday, hundreds of protesters marched through thd streets of Christchurch as part of demonstrations opposing Covid-19 vaccinations and virus restrictions. The marches were organised in several cities around New Zealand as well. In such a scenario, the absence of Black Caps fans in Dubai is very much understandable.

Reacting to the empty chairs at the stadium in Dubai, many fans, especially Asian cricket teams’ supporters, wrote on social media that an India- Pakistan clash in the finale would have witnessed full house in Dubai.

Fans of both countries must have bought tickets for the final match in advance, but their teams failed to make it to the summit showdown. While Pakistan lost to Australia in the semifinal, India were knocked out from the super 12 phase of the tournament.

The low turnout also signifies how important Asian teams, especially India, are for the survival of cricket in the long run. India is the backbone of the sport, both financially and fan-following-wise, and the team not doing well in ICC events will be a matter of concern for all the stakeholders who are concerned about the growth of the game.

Even a normal white-ball game in a bilateral series in India brings full capacity crowds to the stadium.

Schools for Class VI, VII students to reopen from today